Digging through the photos from our last trip to North Dakota, we found some photos of Phoebe that Nicholle really wanted to share, so here goes. (This thread is for everyone's cats, not just mine and CaTTwoman's).

"Beam me up, Phoebe"

Hunkered down in Helga in Wisconsin:

DON'T LOOK AT ME!

One of these days I'll post pics of my hellions. Cats rock :)

Yep, cats rule. My good pal, Bogart, keeps me laughing. I'm amazed by the athletic abilities of felines, they're a joy to watch as they bounce, bound, leap and race about. 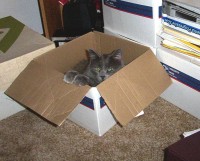 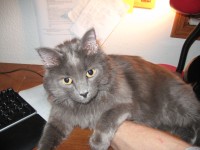 Here is Natasha (the white cat with a tail) and Phoebe (the Tuxedo without a tail) at the Connecticut Trolley Museum, at East Windsor, CT.

Those blue bands around their necks are admission wristbands. Yes, they had to pay admission.
TT Scale... In my case, it is a family affair...
Top

Wow I'm impressed. I tried the cat leash and it was a terrible disaster....

ConducTTor wrote:Wow I'm impressed. I tried the cat leash and it was a terrible disaster....

Most of our cats take leashes well. Natasha wore a leash and harness the day we adopted her.

We got her from the Connecticut Humane society some years ago. The people that had her before (according to the staff there, the previous owners was Joe Lieberman's family, congressman for the state of CT and one-time Vice President hopeful, not trying to bring politics in here, I am just stating facts here.)

Anyways, his kids brought her out to the Waterford, Connecticut humane society, which is not far from the Thames River, and brought her in to show the staff. According to the staff there (we did a little investigation into the bruises that she had when we adopted her, and that investigation took us there), the "kids" brought her in and bragged about what they did to her, and how they were above the law, owing to who their father is. They then showed the staff the litter of kittens that she had, and proceeded to brag about how the kittens were going to be drowned.

Natasha was then tossed at the staff, and the "kids" took off in their Hummer. A staff member gathered Tasha up and chased after them, only to find them at the bank of the Thames River, casually tossing kittens barely old enough to walk into the water. She dove in the water and attempted to save her litter, no no avail. She limped to shore with a limp kitten in her mouth and started wailing, calling for her kittens.

The Humane Society member called the police... who did absolutely nothing.

The staff member took Natasha back to the society, with as many of her kittens as he could fish out of the water, and nursed her back to health. The Humane Society tried to get the local (and state) papers to run Natasha's story, but each effort was blocked. Finally the order came down from the state to have Natasha put down.

The day that Natasha was due to be taken in and destroyed, James woke up and insisted that we go out and adopt a cat that day. Through some meandering and wandering around, we found the humane society that Natasha was at (I kept asking him if he was lost, because we had never gone there before, he insisted that something else was giving directions, but did not know what it was). We went in and asked to see what cats they had for adoption. James looked around and said that none of them there were who he was looking for.

Not long after we heard a blood curdling screech, followed by a man yelling about how deep he was scratched. He asked about that cat, and as a reply the staff member opened the door to the room, and Natasha came running out, jumped onto the counter, and into his arms. The bloodied man came out and demanded that we hand over the cat. James refused. By this time Natasha was cooing and purring in his arms. James demanded to adopt that cat outright. The man claimed to be from the state government and had a state order to destroy that "aggressive" cat.

The man brought over the kennel he had and tried to get James to put her in the kennel. When he refused the "state worker" grabbed Natasha from him and tried again to put her in the kennel. Natasha put up a major fight, again spilling more of the man's blood. James grabbed Natasha, and again she became a rag doll and resumed purring. While this was going on, the staff there had me fill out the adoption paperwork, took the adoption fee, and made a copy of every form, placing one in their cabinet, and had me put one out in my truck.

The state worker told James that the cat was to be put down, by orders of the state. With Natasha up to date on shots, we were able to use that against the man's claims to the contrary. The staff informed the state worker that the cat was no longer their property, that Natasha was now ours. The state worker asked if we had a carrier for her. We replied no, which was responded by cackling about how if we left the Humane Society without the "animal under positive control", that we could be arrested for violating state law.

I went out to the truck and grabbed our spare harness and leash, of which Natasha slipped right into and did not even try to fight. Natasha, confident in her leash and safety, walked to the door. The state worker claimed that was not fair.

Natasha walked all the way to the truck on her leash, nose in the air, and tail as high as it could go.

When we tried to put her in a kennel for her booster shots a year later, she started crying, not only tears, but the calls that a mother cat does for her kittens. We could not handle listening to those cries so she traveled to the vet on a leash. And she travels EVERYWHERE on a leash.

While we were getting ready for a model train show, getting Terry and his stroller loaded into the car, Natasha bolted from the house, with her combination harness and leash in her mouth. After some searching, we could not find her, figuring that she went out to hunt. About 20 minutes into the drive from Groton, CT to Willamantic, CT, Natasha popped up and let Terry play with her tail. We figured "what the heck", and put the harness on her, let her onto the top of the stroller, and she was a DOLL for that show, beginning a long line of shows that she would go to, some by herself, others with friends.

Great cat, just do not try to put her into a kennel.
TT Scale... In my case, it is a family affair...
Top

Great cat, but it seems that congressmen are the same all over the world...