Talk about anything and everything!
Post Reply
9 posts • Page 1 of 1

At 1-3 Nov I had a very interesting experience - I travelled to Helsinki, Finland, by train.
The "Allegro" train is a high-speed train travelling between Helsinki, Finland, and St. Petersburg, Russia.
The trains are owned by Karelian Trains, a 50–50 joint venture between VR Group (Finnish Railways) and Russian Railways (RZD).

Allegro in the Karelian rocks

Yes, I know that there are a lot of the high-speed trains all over the world - French TGV, German ICE, American Acela Express etc. etc., and the Allegro is not the fastest one, but it has some special feature.
It is a trans-border train, it crosses the border between the EU (Finland) and Russia. But it does not stop on the border (to be correct, it stays 10 mins in the Vyborg city and 7 mins at the Finnish border station Vainikkala)
All customs and passport control takes place just on the board of the train. So, it takes 3 1/2 hours to travel from Saint-Petersburg to Helsinki (407 km = 253 miles). For comparison, its predecessors, "Repin" and "Sibelius" trains (usual trains) took 6 hours for such trip. If you go from Finland to Russia, you also can even get the tax-free refund just on the board, in cash! (I've got 1 euro for my Finnish cheese

)
It is very funny feeling when border officer checks your passport at speed 200 km/h while you sit and drink your coffee!

The price (if you catch the "discount time") can be only 20 Euros for the 2nd class ticket. (The difference between the 1st class and the 2nd class is more space, unlimited coffee on the board and free breakfast :) )
Anyway, there is a restaurant coach in this train.

In fact, it is multi-unit electric train, Pendolino series, built by Alstom in Italy, but is based on the fourth generation. Sm3 Pendolino trains are widely used by Finnish railroads (VR Group). It is a body-tilting train - another interesting feature. But some passengers may suffer from motion sickness!

Another interesting thing is the gauge. Before the 1918 the Finland was the part of the Russian Empire (there is even the monument to the Russian Emperor Alexander II on the central square in Helsinki), so the railroad gauge is the same (hmm... almost the same - 1520 mm in Russia and 1524 mm in Finland). For comparison, Poland did not keep the Russian gauge and uses the European one). So, if you travel by train from Russia to France or Germany, it's necessary to change the wheelsets. Estonia uses the wide Russian gauge, so maybe some day I'll travel to Tallinn, although there is no such high-speed train to Estonia...

The Allegro is equipped to operate on both the Finnish and the Russian railway networks. The units have dual-voltage electrical equipment able to use both the Finnish 25 kV 50 Hz alternating current and the Russian 3 kV direct current electrification. It has the unique gauge - 1522 mm! The wheelsets are built to run at over 200 km/h (120 mph) speeds on both the Finnish 1,524 mm (5 ft) and the nominally slightly narrower Russian 1,520 mm (4 ft 11 27⁄32 in) gauge, and the doors are equipped with a retractable step to make boarding from both Finnish 550 mm (21.7 in) high and Russian 1,100 mm (43.3 in) high platforms easy. The units are equipped for both the Finnish and Russian railway technical systems, which differ substantially.

Helsinki is very nice city and I like it, although it is much smaller than Saint-Petersburg. I highly recommend to visit it.

Allegro on the Finland Railway Station in Saint-Petersburg

Allegro on the Central Railroad Station of Helsinki, Finland

Inside the Allegro (luggage section)

So the wheels are actually 2mm wider than Russian rails??? That's...I would have thought that to be a problem.
My website: https://www.ttnut.com
It's the website you're already on. But if you want to be even more on it, click the link.
Top

In fact, no. There are some engineering tolerances.
Finland allows its gauge to be 1,514..1,554 mm (less tolerance for higher speed). Russia allows 1516..1532 mm. Both 1,520 and 1,524 mm are well within tolerances, the difference can be said to be mostly a paper difference. Russian rolling stock can be used in Finland, Finnish rolling stock - in Russia. There are a lot of goods exporting by rail from Russia to Finland.
However, certain Finnish rolling stock do have a tendency to get stuck in Russian railyards due to too narrow gauge.

High-speed trains have less tolerance against gauge error, but this way works well.

Estonia after independence redefined its track gauge to 1,524 mm to match Finland's. But the redefinitions did not mean that a lot of railways were changed. It was more a rule change regarding new and renovated tracks
Top

Wow, a 40 mm range for gauge seems rather generous to me!
#include <std/disclaimer.h>
Top

Russians are not so tolerant and allow only 16 mm range.

I'm imagining a Russian car falling between the rails somewhere where the gauge is 1554 mm... :D

Why was the gauge changed in Russia to 1520 mm? What difference did that 4 mm make?
#include <std/disclaimer.h>
Top

It sounds like a joke, but in fact the railroad wheels are 115 mm in width, so maybe it will not fall between the rails even on the Iberian (Spanish) or Indian gauge (1668 and 1676 mm).
BTW, Spanish "Talgo" trains (1668 mm gauge) are used in Argentina and India (1676 mm gauge). The difference is bigger than that 4 mm between Russian and Finnish rails.

I am sure your can find the 1554 gauge rails even in Russia, somewhere on the old, hard-broken, badly mantained roads...

As concerns reasons - I do not know exactly. Even Russian railroad fans and experts argue about that.
One version is that the All-Russian Research Institute of Railway Transport recommended to tighten up the tolerances of the rails, keeping the wheelsets the same. The purpose was to increase the stability of the rails and increase the speed of the trains (The wheelsets of the rolling stock remained unaltered). But in fact maybe it was a mistake -the wear of the rails and wheels increased dramatically.

Another version - as the USSR used the metric system, the "round" number 1520 mm looked better and more convenient than "strange" 1524 mm (5 ft).

I do not know the truth...
Top

Redefining the nominal gauge from 1524 to 1520 mm is an engineering trickery, more than a "new" gauge. It is well within the tolerances. When added up, the construction tolerances, the allowable wear, and the allowable movement of the rail under load, are usually in an order of magnitude of -10/+20 mm. I am curious though how the 1520 mm gauge is measured (usually 15 or 20 mm below the top of rail), what the nominal wheel set gauge and profile are and how they are measured.

The 4 mm difference is well within the "it doesn't matter at all" range. The biggest effect is likely the different wear pattern on the Finnish wheelsets running a lot on Russian tracks. But that's what wheel lathes are for, aren't they?
Top

The rail gauge is measured in the points at 13mm below the rail top. It is measured by manual gauge 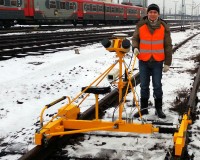 or even special cars - "flaw detectors"

Also, during the movement, the trains can press the rail out, dynamically, up to 2..4 mm.

For illustration: the wheelset and the rails; dimensions for the gauge 1550 mm and 1574 mm (not allowed normally, 1550 mm is barely allowed for tight curves temporarily, until the repair and/or maintenance works)