Here is a place to talk about converting N scale drive mechanisms to TT scale. I imagine it will largely to do with bogies, but other parts of the mechanism could also be discussed.

Please share what you have done, how you did it, what went well, and what didn't work that good. This can help us all with our future projects. Photos of your projects will really help to see what on earth you are talking about.

If you have ideas about converting mechanisms please throw those ideas in, but why not have a go at it yourself also? Hopefully this will be full of practical things to inspire you to get that loco project running!
Steve B
Russia in Narrow Gauge
Bigelov's Flickr Account
Top

To get the ball rolling, I have converted two N scale mechanisms to broader gauge. Both were Atlas products, one a VO1000 converted to 10.5mm for 2mm fine scale broad gauge. The other was a C-628 conversion to 12mm gauge for my (ongoing) Alco RS1 project. Both were very similar in build, but I will only detail the RA1 bogie here. Another VO1000 is due to be modified for a friend.

Photos and most of the text from my Flickr 'Alco RS1 build project' album. Extra text is added here to explain some things in more detail.

Step 1. Peresvet 8.3mm wheelsets were used with the pin-point ends ground down. The Atlas drive gear/muff was drilled out to 1.5mm.in 0.1mm increments. A sheet styrene spacer was used to set the back of the wheel spacing the correct distance for 12mm gauge. In this case it was 0.060"/1.5mm.
I used axles with one removable wheel as I thought it would be easier to insert in the muff and set it at the right distance.
As I used a drill to make the hole larger, it ended up slightly off centre making the loco wobble as it drives. I think using a braoch to ream out the hole would keep the hole concentric. We shall try that on the next V01000 that we modify. 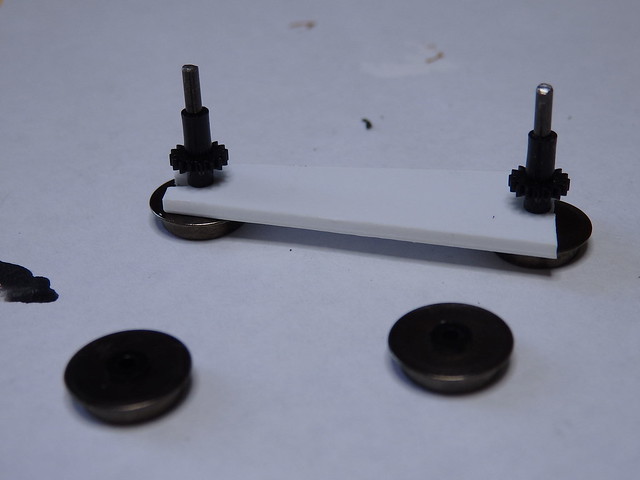 Step 2. Image shows the original drive axle in front, with the larger broader converted axle behind. the original wheel was 6.5mm diameter with a circumference of approx. 20.4mm, The 8.3mm TT wheel is 8.3mm with a circumference of approx. 26.1mm. This means it should travel about 25% faster than the orignal loco. I am not sure how this will work in slow speed running. 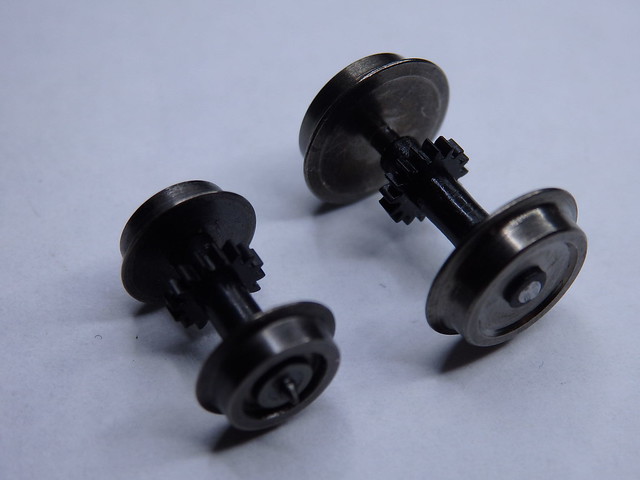 Step 3. Image showing the axles installed in the bogie housing. The centre axle has had the wheels removed but left in place as it is part of the drive train. When I designed the bogie side frames I had to make sure the centre axle was pushed upwards a bit do that it would still engage the gears properly. 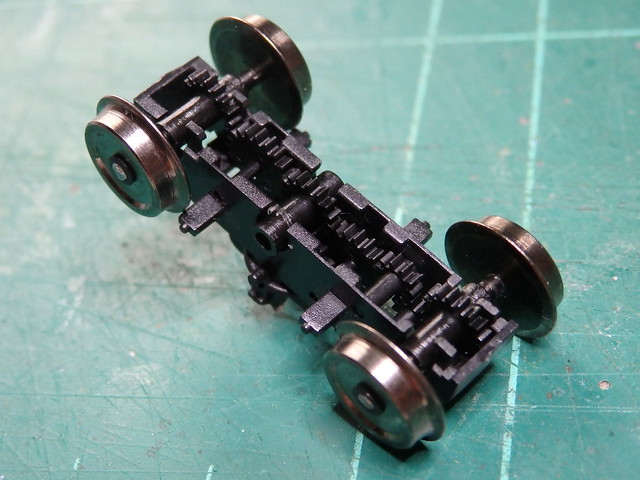 Step 4. A section of the electrical pickup post was removed to provide clearance for one of the wheelsets. I just used a hobby blade to slice the plastic away. 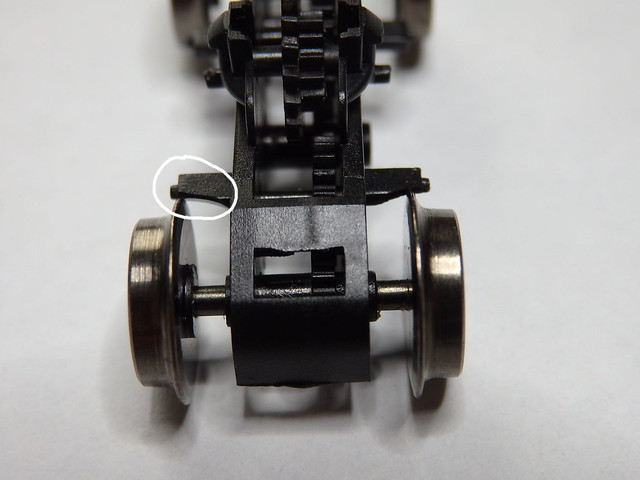 Step 5. The electrical pickup was cut back. The original made contact on the outside of the wheelsets, but this is not possible if broadening the gauge. A 1mm wide phosphor-bronze contact strip was bent and soldered to the pick up to provide electrical contact. I had to glue teh pickup in place so that it wouldn't fall off while I was installing the axles and side frames.
You can see the ground down ends of the axles. Both axles were installed so that the removable wheels were both on the same side. I thought this might have been better with the electrical pickup. I just had to make sure the pickup didn't foul on the insulating spacer between wheel and axle. 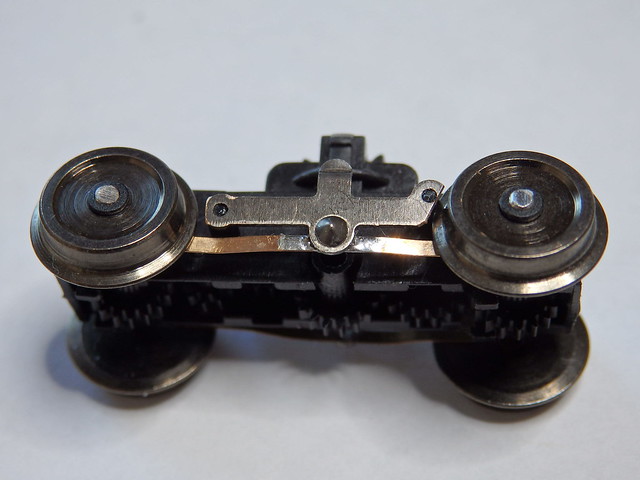 Step 6. 3D printed axle side frame cliped in place, with the design taken from the original Atlas side frames. 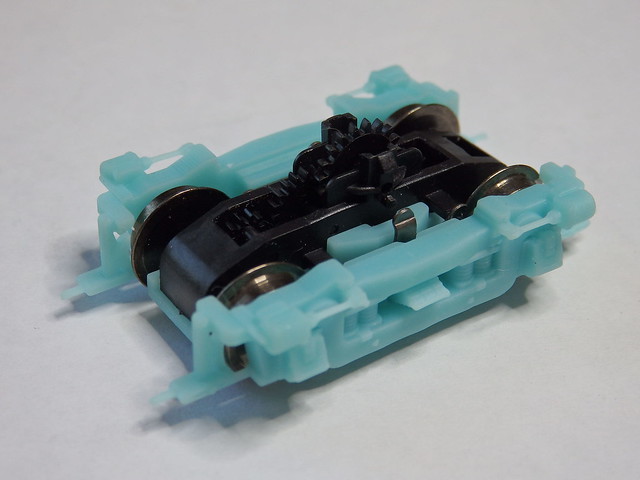 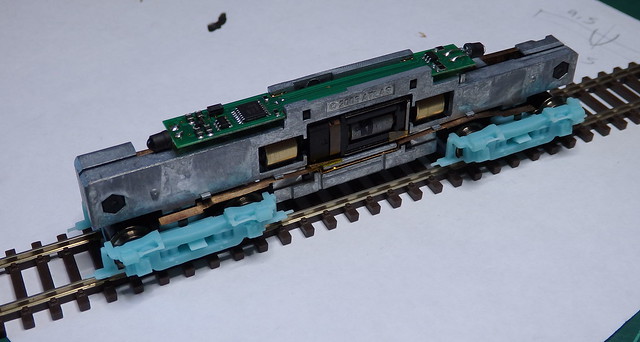 Pros: It works!
Cons: Eccentric axles leading to wobble down the tracks. Higher speeds due to larger diameter wheels.

No doubt there are many other ways to convert a drive mechanism to TT gauge, so please add to the conversation.
Steve B
Russia in Narrow Gauge
Bigelov's Flickr Account
Top

Really good stuff. The most I've done with N scale is using Atlas N scale motors to power some prototypes. The main thing to know about those is that the drive shaft connection is a hexagonal indent in the flywheels. This requires custom (I 3D printed them) drive shafts.