Did you mill it with 0.020" positioning? I would try 0.008" deep and the route wider than the milling cutter. For some space beside the cutter.

Check the x-y axis at drawing a circle. Perhaps they aren't synchronously. Both of your milled holes look similar.
I mean a reducing the depth of cut. But a lower feed rate is also a try worth.
Lok-n-Roll.de - we send worldwide

Well actually, it's not a drawing but, a tracing of the finished brass plate. Sorry, I usually manage to leave something off when I do these things but, I see MacG has provided the answer.
Don't get too thick. There are mounting 'clips' in the body shell to hold the chassis in. Even with the .032" i used I had to chamfer the edges. Clipping it in is not as big a problem as getting it back out without breaking the body and gluing nylon is a pain in the rear end. 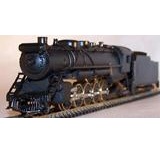 Assuming your X axis is left-right and Y axis is top-bottom in your pics, your Y axis has a lot of backlash.

Are you using Mach3 for your controller? If so, it has a backlash compensation setting somewhere. Other controllers should as well.

But, it is best to eliminate the backlash.
Top

>> With over sea shipping and all that will cost you your first born, a leg and an arm. << NAH, you don't wanta go there, she's been quite a handful, at times, over the years but, now has her own hands full and we just get to visit and go home again!!

There are 4 x clips each side - marked in red texta for clarity.

Probably a good idea to go with 0.040". I have noticed the 0.032" I used does flex a bit if I fiddle too much. Going too thick could create to big a gap between the body and the trucks.
The other option would be to remove the clips but then it would rely on the couplers passing through the pilots to hold it all together. If the pilots broke you would be in deep 'doggie-do'. I've had one small disaster but was salvageable.
Ian
Top

Bernd wrote: Sherline uses Lunix and the software running on the Sherline is EMC. I use CamBam for my CAM program. As far as I can determine from the manual there is no backlash compensation in the software. The machine has hardware backlash adjustment screws. See pic.

You need to measure backlash with a dial indicator. Your hand is not sensitive enough to feel a few thousandths of an inch movement.

http://linuxcnc.org/docs/2.6/html/confi ... onfig.html
"BACKLASH = 0.0000 - Backlash in machine units. Backlash compensation value can be used to make up for small deficiencies in the hardware used to drive an axis. If backlash is added to an axis and you are using steppers the STEPGEN_MAXACCEL must be increased to 1.5 to 2 times the MAX_ACCELERATION for the axis.
Top
Post Reply
15 posts