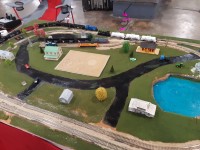 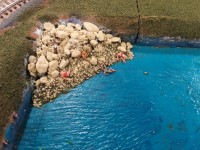 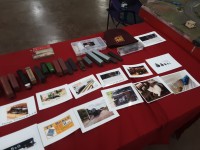 Here is a roughly 10 minute walkaround from the layout section of the show today:
https://youtu.be/3pkefTQfJb4
Course Set, Speed - Maximum Warp, PUNCH IT!
Top

The show thus far (only 1 hour left to go at this point) has gone rather well. Aside from one engine receiving light damage from a kid who refused to listen to my direction to keep his hands off of the trains (not to mention his father getting a little uppity over my polite request to put the trains he was pulling off of the layout down), the show has been rather smooth.

The coupler on one of my modified BR107s was broken off, so we had to pull it from service and the HP 4-6-2 pacific suffered a rod jam from a piece of ballast getting in it, other than that, motive power worked well over a 15-hour show. We have had more requests for British TT on display, so we will soon move forward with our plans for a Tri-Ang layout sometime this year.

It is a 4-5 hour drive home following the show, so it will be a day or two before we compile the "post-mortem" of the show.
Course Set, Speed - Maximum Warp, PUNCH IT!
Top

your video shows that most of the modular layouts are set high enough that kids can't reach them easily and/or they have restraining devices. When walking around I appreciate the taller modules myself. Having to haul legs and supports around can be a hassle though. Thanks for the video. Find any TT at the vendors tables?
Top

That N.P. T-shirt was a great choice.
Ian
Top

Some people screw a length of acrylic sheet or similar to the front fascia, a few inches above the height of the layout, to stop children touching. I've considered it myself as some of my road vehicles and small figures are precariously close to the edge. Fortunately no mishaps yet but there's bound to be a first time.
Naples sTreeT: http://mattersofinterest.co.uk/naplesstrt.html
The video: https://youtu.be/wUoV41tM4AU
Computerised switching: http://mattersofinterest.co.uk/swsetup.exe
Top


We did find some accessories and landscape materials that listed TT Scale on the packaging, if that counts.
Course Set, Speed - Maximum Warp, PUNCH IT!
Top

Well, it took us far longer to get home than first expected. About halfway through the drive home last night we started feeling this weird vibration in the rear end of the truck, followed shortly by a loud rumble and clunking...

This might impact the plans for the Sioux Falls spring show, depending on how long the repairs take to complete.
Course Set, Speed - Maximum Warp, PUNCH IT!
Top
Post Reply
23 posts