As usual the final display deviated from the plan a bit.

This proved to be a good sized layout that two people, or one in a pinch, could handle. One person sitting in one of the chairs could easily see the whole layout.
Setup with three people took two hours. Pack up with two people one hour. Found a better way to pack the van.
The minimum curve was R6 so everything ran well. It was missing a few things, like a bigger staging yard and Bjoern's bridges, but as designed for easy operation and setup, it is a winner.

Shown here on the new left hand return loop pulling a short train of Zeuke coal cars. You can see we are still using duck tape to hold the module pieces together.
I need to devise abetter method to clamp them together. It will probably involve gluing wood pieces to the modules and mechanical clamps to hold them together. Also needed is a better way to keep the pieces vertically aligned. My cable channel idea will not work. The plastic is too flimsy. May have to make wood channels that clamp along the outside. Might be able to make the clamps also the alignment pieces. Have to do some planning.
Also shown is one of the WIFI throttles I am field testing. They work well and survived a fumble/drop test. 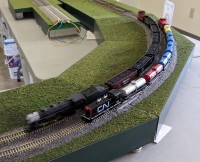 The pacific ran faster than one of my SW1200s. For some reason it is slow. Been cleaned and lubed. Hope it is not a motor issue. After a few laps the pacific pulling the coal cars would catch up to the SW1200 pulling tank cars. There were enough #6 crossings around the layout that I could plan ahead and switch the slow train to the other track to let the fast one go by. The audience liked it.
Two short trains worked well on this display. So did four trains with more attention!

At the end of the day we switched to two ICE trains.

Just set then to matched speeds and let them go. That did not stop them from catching up to each other while we were distracted.

It was a good two days. Too much noise at times. Not too hot. The layout ran well. The HP Pacific was very good at finding joints that were kinked up. We didn't level the tables, just levelled the modules on the tables. I think that there should be one more step in the levelling process. Stand back from the layout and check each joint by eye from the side to see if there is a kink up or down.

Next stop Chilliwack. Much to do. A noisy SW1200 to diagnose. Time to dig out my two HP steamers and see if I can get at least one of them into service. Acquire materials for the station modules.
Regards
Bill Dixon
TT-Tracks
North Vancouver, BC
Top

My experience with the SW1200s is that they are a lot slower than the HP locos of all types. Nothing is wrong there, but the noise is likely a motor issue. My husband has changed out around a half dozen motors on the MTB SW1200s, and the replacement motors have yet to wear out.
TT Scale... In my case, it is a family affair...
Top

Thanks for that. But after all, the SW1200s are not made for speed. The slowness was noticeable mostly because for the first time in years we had another kind of useful N American loco on the layout for comparison. Voytek has prepared an HP steamer which we hope to see at the show in Chilliwack in October.

Running the two ICE trains at the end of the train show has proven to be a useful exit strategy. We can pack away everything else while they are running, and the ICEs are easy to take down and pack when all is done.

@Bill: This is a nice practical Wi-Fi throttle. Perhaps a little bit too thick. It is similar to the project of Geoff Bunza at MRH. I have found this throttle in his topic.

The SW1200 has a very good gear ratio, not comparable with other locos. It is a nice switcher.

The motor issues are just the catch.

CaTTwoman281 wrote:My experience with the SW1200s is that they are a lot slower than the HP locos of all types. Nothing is wrong there, but the noise is likely a motor issue. My husband has changed out around a half dozen motors on the MTB SW1200s, and the replacement motors have yet to wear out.

I would like to know of a good replacement motor for the MTB SW1200, one that fits, runs at a suitable speed and does not require a lot of butchering up to install. I have an un-run SW1200 that I’m hesitant to run until I know I can replace the motor when it fails. Maybe a video clearly showing closeups of the motor swap could be made for YouTube. Even a how-to post with decent still pictures that detail the process, could be posted here on TT NuTT, and I’m sure it would be appreciated.