The last module in the mainline is the new Right Hand Loop. 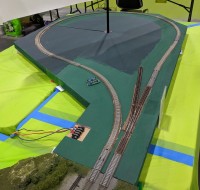 It is a different design than the first loop. It is 4'x6' instead on 4' x 7' and is built differently than the first one. It works OK but there are some abrupt angles at the joins. It shows that it was a bit rushed in construction. I am going to relay some of the track and experiment with a module alignment system.
The inside is empty. I wouldn't mind seeing a mountain scene with a single track climbing at 4% up to a small mine. An SW1200 pushing a few cars up hill would have no problem with that grade. I am not going to build this as I have enough to carry now.

A hole was left in the center of both new loops to accommodate the banner. 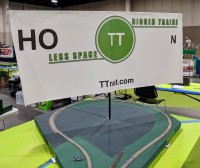 This worked as designed and will work well for small shows, but for big shows the banner needs to be higher to be seen. We may experiment with putting it on a table. There has also been some discussion about a new banner. Richard and Tibi are looking into that.

This is the new staging yard that Tibi built.

Two ladder end modules and a handful of short identical sections in the middle. If we have the space, like here, we use all the center sections. If we have a shorter space we use fewer sections.

To use the folding end loop as the return loop for the staging yard, we had to angle it out a bit.

We used this 15 degree piece of BR2 Bedding track to do it. In the future this will be replaced with a purpose built sub module with at least R3 on it.
The module to the left is the first module of the return loop set Bjoern built. The switch is locally controlled and power routes the branchline. Tibi is contemplating automating it with sensors so it throws whichever way is needed by a train approaching from the loop side.

This module was built as a filler for Portland 2015 and originally had an abandoned spur on it. The spur was installed sometime ago.

This module is here to give enough space for a train to stop when it hits dead power track. Without this module there was the possibility of a train not stopping in time and overrunning the turnout.
The short (BG2) filler module had power jumpers added to it to make the reverse loop work correctly.
The functions of these two modules may be combined into one module in the future.
Regards
Bill Dixon
TT-Tracks
North Vancouver, BC
Top

Lastly we have the folding end loop.

Out of the mainline and being traversed at slow speeds in the staging area, it performed well.

We had unused modules, Terry's set of four, the two sway back modules and a few other pieces.
The layout was a good size for us with lots of space in the middle for us, stuff and two tables to work on.

Not everything worked perfectly but still it was a good show. No it was a great show!

The Exhibition hall is nice and has reasonably priced good food. Other halls that I have displayed in have charged twice as much for a poorer quality product.

Salt Lake City is a nice city. The people were always friendly and polite.

My thanks to Tibi, Terry and Richard for coming and helping make it a great show.

My thanks to Bjoern who built his modules and GuiTTar case so well, that they still operate well and delight many new viewers.

Our thanks to the NMRA show staff who helped us in many ways.

My thanks to Zeuke who provided material support for the new track work. And for the new cars he is bringing out. Support him by buying them so he can bring out more new models.

My thanks to everybody who encouraged us and supported us in our endeavours to display TT-Scale and help bring it back to life.

Salt Lake City was a long, tiring, expensive, Fantastic, Rewarding show. Let's do it again . . . .
after the bills are paid off.
Regards
Bill Dixon
TT-Tracks
North Vancouver, BC
Top

And here is the diagram of the layout as we set it up.

It differs a bit from what we had planned but turned out better.
Regards
Bill Dixon
TT-Tracks
North Vancouver, BC
Top

If/when you guys retire module 1, you should gold plate it. And display it of course lol.

ConducTTor wrote:If/when you guys retire module 1, you should gold plate it. And display it of course lol

You guys are on the background at the beginning of this video.

MacG wrote:You guys are on the background at the beginning of this video.

At 00:35 to the right of the US flag beyond the sky blue shilloute of mountains (wavy shape) on the first shown layout you could see those green colored tablecloths. I watched this video yesterday and did not notice them.
Rich1853
Greetings from Melbourne, Florida USA
On the Space Coast of Florida
Top

Get out of the way stupid mountains!!!!!