Moderately productive today. Along with a run to recycle, some shopping and cleaning house to prepare for two new cats, I built two sets of stairs for the warehouse. 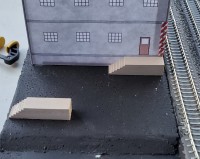 It turns out that 1/16" is the right height for a step.
So layers of 1/16" basswood, glued in a stack, sanded smooth and the first coat of concrete paint.
They look OK. Need to solder up some railings and add another coat or two of paint.
I think I will add one more layer on the bottom as a landing.

When they are glued in place they will help hold the building in place.

Not very happy with the ballasting. Going to dig it out and try again.
Bought some HO Scale cork roadbed today.
Regards
Bill Dixon
TT-Tracks
North Vancouver, BC
Top

With the comment from the Chilliwack show about insurance, I been talking with other groups about what they do.
The best idea seems to become an all NMRA member group. They provide coverage for such groups who display at shows.
The dues are not too bad and we could use one of the show honorariums to pay the dues.
I am already a member, so we only need memberships for Terry, Tibi, Voytek, Xenia, and maybe Graeme. Richard probably already has a membership.
That would cover all our regulars at shows for 1,000,000 dollars.
I think the idea is worth pursuing.
As we will not likely have a show this year that will need it, I would do this February 2021.
Regards
Bill Dixon
TT-Tracks
North Vancouver, BC
Top

Is there new insurance requirements being set out by the sponsors of the show? I checked the NMRA site and it states that a sustaining membership ($120/year) is required for a group membership, while the cheapest individual membership is $47/year without the magazine, $75 with. What’s not clear is whether a group must have a sustaining membership for the group, in addition to all of it’s members individually belonging to the NMRA. Additional family members can be added to a regular membership for $9 each. I became a life member many years ago when it was a flat rate, which seemed insanely expensive at the time, but if I hadn’t done it back then, I couldn’t afford regular membership once I retired.

I am all for it and will look at the options this weekend.
Top

Been working on module five of the industrial area.
I had started to apply ballast. 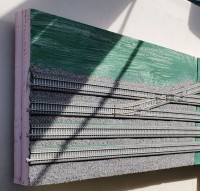 So I removed it.

Then I glued HO Scale cork roadbed and sheet down.

After the glue had dried I trimmed to size and added a coat of filler to smooth everything.

I saved as much of the ballast as I could. Some chunks couldn't be broken down into individual grains and were discarded.

Now I have a good surface to work on.
Regards
Bill Dixon
TT-Tracks
North Vancouver, BC
Top

Did not get very much accomplished since we got our two cats. I couldn't leave work in progress on the dining room table where the cats could get into it. The thought of the vet bills caused by one of them eating something I left out was a big deterrent.
So I bought a roll top desk.

Now I can close the top and keep projects safe. I am currently working on three HO scale sound equipped locomotives. The $ will help pay for a new Digitrax DT602D throttle.
Regards
Bill Dixon
TT-Tracks
North Vancouver, BC
Top

Nice desk! And having the roll top will force you to keep the desk at least cleared off enough to close the top down so that you can’t see the mess!

By the way, in your previous post, after looking more closely, it looks like you used the HO cork between the tracks (and not under them as I first thought) to raise the level of the ballast, correct? That should reduce the amount of ballast required to get it to that level, thus saving the weight of all that extra ballast and glue, as well as making it less likely to chip and fall off.

What does the new Digitrax throttle feature over the earlier one to justify the increased complexity and expense? For some reason, I thought you were using the Roco Loco Mouse, which I thought only worked with Lenz systems.

I started out with DCC in the nineties using the first Digitrax system (a Challenger), then went to Lenz, which I preferred, but after the US distributor, Debbie Ames retired, US support for Lenz (and even German support isn’t great) went down the tubes, so I bought an NCE PowerCab to use with my T-Trak-N modules, and I like it quite well. I still have my Lenz for use with my On30 modules which haven’t been set up in about three years now. I think I enjoyed the On30 modules/Lenz the most of all my modular activities, and I even bought a second Lenz System to use on my earlier sectional S-Scale layout in my garage (built in 1990), but after a move in 2000, a case of laziness set in and I have yet to install it (still plan to do it, though). Lenz pretty much invented DCC for model trains, I just wish support for their system was better.

Oh man I could use one of those desks. Living with 4 cats is challenging.
My website: https://www.ttnut.com
It's the website you're already on. But if you want to be even more on it, click the link.
Top

We have more than 4 cats, and our layouts see quite a bit of feline attendants. Ours are pretty well trained, though.
Life is short, play with TT Scale Trains!
Top
Post Reply
1299 posts