Since I was young, I had been planning and beginning two or three layout projects, but it didn't last, for technical and professional reasons ... Now, it's time, I'm back in business ! In TT scale, and "Hobby" price gauge. Here is the genesis of my layout project !

So, let's travel back in time, in GDR, German Democratic Republic, two hours of Trabant driving south from Berlin. The region is still rural, in these 70s, however factories (metallurgical, chemical, sawmills) and coal mines are omnipresent in this land. So, railroad always ensure its first role: transport workers, and goods.


Gnomdorf Am Wald's station has not much "classic" passenger traffic left : antique buses, and a Reko-Wagen DR passenger coach, brings workers to their respective employers early morning, and allows them to go back home in the evening, to the closest big city.

But as this little town has several companies of national interest, the traffic is a lot of coal (in gondolas), metallurgical products (in flat car), and of some other specialties ... So, there comes a refrigerated wagon which bring to the next city (and, for a part of it, to Berlin), production of the small local delicatessen, familial firm owned by herr Alfred Witzland. We can also see there several tank wagons, especially to deliver to the city the weekly production of fuel oil or asphalt, as well as other chemical substances. Eventually, there comes a casked wagon from the Hungarian Railways (MÀV) which brings sweet Balaton's Lake wine ...

Trackplan of the station is reduced to its simplest being as an end of line : a unique track come from the "big city" (which is fictitious, but suggested by a siding at the end of network, just like the first Inglenook Sidings trackplan by a British model railroader from the 30s'), divides in three sidings, without moving plate (it was removed at the end of Steam era).


Considering the small distance and low speed on the line - the maximum train length is a convoy of 3 wagons hooked to the T334 locomotive - the train always arrives at Gnomdorf "pushed" (cars forwards), the loco shunts wagons for unloading or loading, then makes the train to go which leaves Gnomdorf "loco first"

. An operator of DR (East German railroads) keeps a close watch on the platform of the first car, and is in constant radio link with the loco engineer. He makes switches moves, and wagons coupling/uncoupling. No mechanical or light signals - everything is simplified as much as possible (a stick-control serves to determine if the train is running or not on the unique track, telephone is also daily used and in case of incident or machine failure).


About railroad related buildings and landscape, there is not much to say - except a red brick house serving as "living quarters" for the DR local employees, a loading/unloading dock, and house of a level-crossing keeper, it will be simple and cheap as possible. Some German vehicles (Mercedes, Trabant, VW, other) or Italians (IVECO, Fiat) will take place. The siding will be hidden by a stone tunnel entrance.


I thought about finding a guitar case, 110 cm long for 45 cm wide (in the widest part), then a friend of a model railroding forum which lives nearby gave me a guitar case for my birthday ! Thanks to him !


Here we are, I believe that I've got nothing to add.


Term of realization: before end of summer.


Additional rolling stock, in the future: first of all, 5 goods wagons, and a Reko-Wagen type passenger coach. Then, if my bank allows it, one more loco ! For sure, a German-look one, like a V36, or an other one T334 ... I'll see !


In the next posts, you'll see : pictures of my rolling stock, beginning of platform work, setting tracks and switches, then ... surprise ! Ah, things happen, you make mistakes while crafting too fast, then you figure it out ... then you change an element, and it's much better

GuiTTar_Case wrote: Ah, things happen, you make mistakes while crafting too fast, then you figure it out ... then you change an element, and it's much better

Very true. I have been there multiple times.
Life is short, play with TT Scale Trains!
Top

Here we go for the description of last works on "Gnomdorf Am Wald" layout project ! Late, I know, but better late than never

First of all, my rolling stock, the starter set : When it was delivered by DHL ! On its track : so, here are the T334 2-axles diesel shunting loco, a gondola, a reefer, and a flat wagon. The first "board" attempt : with vegetable cardboard packaging, glued with a glue gun ... After painting it black, with a simple aerosol paint, found at the local DIY store ! But I didn't make it final : at some points, there were lack of space for shunting actions ... But I didn't glued tracks on the board for good : I noted that there were serious issues of electric contacts and misalignment of tracks at splints on Tillig TT "Bettungsgleis" track ...

The assembled parts of cardboard had buckled after the gluing, that's the fact ... I hesitated a long time to build an oval layout, not in point-to-point. But that would have made the guitar case useless, so to deposit at the dump

Now, and thanks to my friends at "Train 29" model railroading club in Douarnenez, I've got a "brand new" 5 mm cardboard platform for my layout, in one piece !

See ya ! Greetings from France

I hope you are doing well. So here's some news about the "improved" guitar case ! :)

First of all, the track plan has been modified once again : now it has the "typical" form of the "Inglenook Sidings" layouts. The track is laid with double-sided tape, which would allow me to take off the track slowly, without dislocating everything, if a switch no longer works.

I also started the decoration, and the buildings: I built the platform of the small station "Gnomdorf-Am-Wald" in feather cardboard (three layers) with Auhagen paved paper on top, and a small half-timbered "typisch Deutsch" house built in paper printed on cardboard. It doesn't feel too bad, well, obviously, it's not of a professional skill, but it's good to me !

And I also laid the road - the small asphalt road that leads to the dock. For the decor, only grass for the moment, the rest will be in the coming months ... Road vehicles, allotments, goods on the quay, figurines, relief in the narrowest part of the case, trees, cows in a fenced field, then the final touch ... Hang on tight ! Two small "table flags" of the GDR, an MP3 walkman loaded with patriotic songs from the GDR era with its autonomous loudspeaker

I will give visitors a headache at the next exhibitions ! 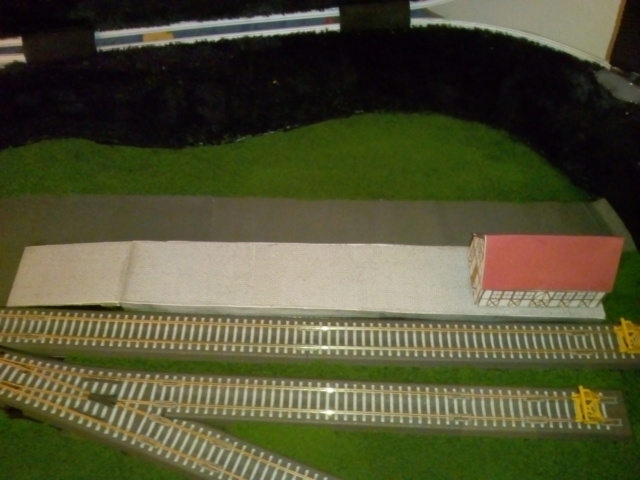 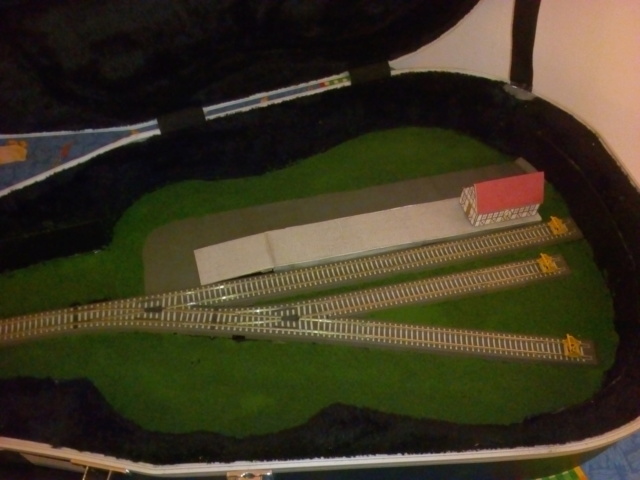 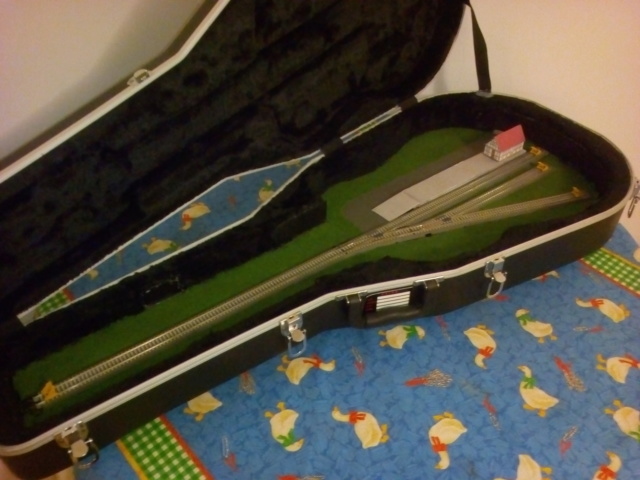 Then, on January 12 and 13, I participated in a local model exhibition (mainly rail, among other things) as an exponent !

It was the first time I had exposed a model train layout of my own design ... The atmosphere was good, the organization competent, then we had a good time with the colleagues from Mayenne (western France) - we slept in the building on Saturday evening - and at the evening meal, it was "offbeat humor" like Groland (a French humor TV show), Pierre Desproges and Coluche !! I am very satisfied ! Next time, however, I will provide small "Do not touch" signs to protect my material from "hyperactive" children ... (who says "uneducated" ?)

Well, the majority of the visitors - and several exponents with whom I have made contact - congratulated me on the originality of the layout idea (it's true, I must be one of the few in France to have actually done so !), asked me questions about the TT scale (they had never heard of it), and encouraged me to continue this way !

I'd like to tell you good news ... but I dismantled "Gnomdorf Am Wald" guitar case layout. It's over. I picked up just tracks, points and buffers, and drop the remains to the local waste disposal ...

To be honest, I was really disappointed with all the issues I got, while trying to build a layout.

Issues about leveling the platform (when the wagons goes alone from the single track to the second switch, sounds bad ...), issues about electric contact failures with the T334 locomotive and its "false" 060 configuration (the middle axle doesn't exist, so it's a 040, and with Tillig TT "Bettungsgleis" points including plastic made switch cross, well, it stalls every time on a small layout) ...

Finally, I got mad about the "scenery" tryout, it was so poorly conceived, poorly thought out, poorly done, that I decided to scrap it. It suffered from the moisture of climate in Brittany, despite my efforts. It's over.

At least, I've tried. I hate to fail, but I keep loving playing on my kitchen's table with my GDR- and Eastern Europe styled locos and wagons !

I won't give up and pitch all my trains, tracks, material, despite the fail of my layout project. It would make me suffer too much, given my low income and the sacrifices I had to make to buy this material.

Yet, I don't have any layout project, any plan, any idea. But there's more important : until 12 or 18 months, I'll move from Brittany, maybe to Pas-de-Calais, where model railroading clubs are much more "alive".

So, I won't build a layout yet, to dismantle it once finished for the move ! It it finally comes, march 2021

See ya ! Greetings from France.

I like to think I have learned from all my Life Experiences, sometimes it is only that I will Never do that again! Sometimes that is what can be called Progress!
Top

Not such a failure in my opinion. It just forces you to rethink things and do something you will love next time. That's how I try to see things when I get frustrated lol.