Bill I hate to nitpick but the straight-curve-straight nature of those modules is kind of odd. Trains will look a bit silly going around those. Is there a limitation forcing that geometry?

Hi Alex,
One of the limitations is the fact that the UniJoiners that hold the modules together must fit into UniJoiners Bedding Track sections at the module joints, and these pieces are are not made in the desired large radius curves. Therefore, short sections of straight track with UniJoiners are used at the module joints, with flex track (bent to the desired larger radius) in between. It’s one of the trade offs of using the UniJoiners which allow the modules to be joined together without needing the traditional c-clamps and access to the undersides of the modules at the joints. All this also allows the modules to be set up on banquet tables (which provide greater stability, and eliminates the need for having legs on the modules which means less stuff to carry). Once the modules are joined with the ballast and scenery installed, the short straights will be less noticeable.

Yeah I see what you mean...

Because the track joiners also hold the modules together, the connection of the track to the module needs to be pretty robust. Unfortunately, most of Bill’s modules are made out of foam, which doesn’t hold tracks very well, whether they are screwed, nailed, or glued. Personally, I prefer at least 1/8” doorskin plywood, but it’s getting hard to find, since door manufacturers now seem to be using boards made of compressed sawdust & glue with a woodgrained photographic overlay (cheap garbage that doesn’t hold up for use in a module, & not much better for doors). My last modules were made using 3/16” Luan underlayment plywood with a 3/4” square perimeter frame and short, clear pine 2x2 legs, in a table-top design like T-TRAK, but with 24” square modules using HO UniTrack, which is suitable for HO scale, British OO, Sn42, and smaller On30. The UniTrack curves are based on 60mm track centers, which is pretty close together for some of the larger On30 trains. The 3/16” Luan plywood should work ok for TT scale as well, and it’s just slightly heavier than real plywood doorskin, but building up the module out of wood is more labor-intensive than just simply using a slab of expanded polystyrene foam. I wanted to make some new TT modules, but gave that idea up because all the Bedding track is too hard to come by in the USA, and the bedding track curves are too limited in radii selection.

ConducTTor wrote: ↑Thu Jan 27, 2022 9:44 am the straight-curve-straight nature of those modules is kind of odd

The appearance bothered me also. It is as rail(Bill)twister says, a result of the need to use bits of bedding track to hold the modules together. I intended to discuss this with Bill Dixon when we meet. These modules are made with a layer of styrene on top of the foam. I've thought of the possibility of using all standard flex track with standard rail joiners for the running, and use the pieces of bedding track below the surface, say upside down on the underside of the styrene, just to keep the modules locked together. Possibly that won't work and probably it's too late to re-do it all. Just disguising the bedding track pieces should help considerably.

Don't most module standards want the track to end perpendicular to the module end?
#include <std/disclaimer.h>
http://espeett.blogspot.com/
Top

This discussion has caused me to look again at photo (and enlarge it’s size to fill the screen) of the four curved modules with the track installed and proposed scenery painted in place, and I can now better see the straight-curve-straight effect everyone is talking about. It may be an illusion, but it appears as if there is a sharper curve in the middle of the module, rather than a smooth, constant radius between the bedding tracks. The thing that makes me wonder if may not be just an illusion is the way the right-most module appears to show this slight “kink” to a lesser degree. Were the curves laid out on the modules using a beam compass or some sort of template, or were they just done by eye? I think the effect is increased by the different color of the bedding track compared to the flex track as well, and once the tracks are weathered and ballasted should be far less noticeable.

Marquette brings up a good point as well, most module standards do have the tracks crossing the module joints at 90 degrees in order to alleviate kinks in track alignment. In any case, these curves are large enough so that any variation in radius (whether real or visually imagined) shouldn’t adversely affect the operation of the trains.

Wouldn't it be possible to use other pieces of track and use the bedding track joiners (screwed/glued to the module) with modules using bedding track?
Top

The biggest problem is that the foam doesn’t hold fasteners or track very well. A conventional module uses bridge tracks between modules, and these are expected to be straight and at right angles to the module interface joint. Different lengths of these bridge tracks are specified in each set of module standards, anywhere from 2” in length up to a standard piece of snap track (such as 9” in HO).

If large radius bedding track were made in the desired radius there would be little or no problem. Am I the only one who looks at the new curved modules and sees what looks like a kink of tighter radius approximately in the middle of each module (with the module on the far right-the green one, appearing to have the least amount of kink)?

I took the liberty of making the bedding track pieces match the other track. Then I placed a quarter disk layer on top to judge the curvature.

I'd like to see how they look and work. 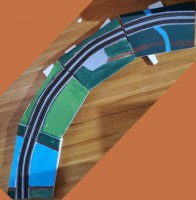 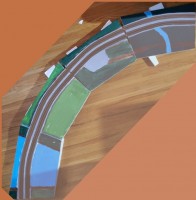