These are prototypes which either exist as TT scale models or can be modeled from existing models.
Post Reply
148 posts

Rich B wrote:I can't really comment on the popularity, but proportionally I've seen as many 120s on IC/ECs in Dresden and Leipzig (compared to 101s) as I have in Düsseldorf or Cologne. Every time I've taken the Amsterdam-Prague sleeper it's had a 120 from Emmerich to Berlin.

I can't confirm that. When the night trains run, I'm only very seldom close to the tracks. But day-time IC / EC trains are pulled by series 101 in Dresden. Series 120 only occasionally serves as replacement.
In general, series 120 is clearly more used in West Germany while in East Germany series 101 dominates.
.

In the current diagrams, EC 178/9 and EN 476/7 are booked for 120s. I know that's not a lot, but it is pretty much the extremity of domestic IC loco workings in the former DDR. That's a quarter of the EC/EN trains on the Berlin corridor!

101s seriously dominate all IC workings both sides of the old border. But then, it's 145 locos against 60, with 101s being more reliable too from my understanding.
http://www.flickr.com/photos/richbucknall/
Top

My last trip to Germany (Berlin) I have seen a lot of 101s and 120's. I think they had so many 120's (maybe waiting to be repaired or for scheduled maintenance). There were 4 of them in Berlin-Lichtenberg station just parked. Or maybe waiting for their next assignment (?).
Top

However, I spend about 80 % of my time in Dresden. I regularly see series 101. But at least half a year has gone since I saw series 120 for the last time.
Whenever I was in a West German agglomeration, it was almost guaranteed to see series 120 on any random day.

For me, this is a very clear difference...
"Let's eat, grandpa."
Punctuation marks save lives!
Top

This thread looks so deserted. I think, I should add something once again...

So let's see what's next: So our next model seems to be series E32.

In the early 1920's, the formation of Deutsche Reichsbahn (German Imperial Railroad / DR) was progressing. The deficitary state railroads (formerly owned by the German federal states) had already been bought by the German Empire. But their merger was not yet completed. In those years, the activities of the respective state railroads (usually referred to as Reichseisenbahnen / Imperial Railways [no abbreviation]) were only partially coordinated.
Those were the circumstances of series E32 coming to be. On the growing network of electrified lines around Munich, motive power was needed. So the (formerly Royal) Bavarian State Railway placed an order of 29 electric locomotives for commuter service with manufacturers Maffei of Munich and Brown, Boveri & Cie. (BBC / supplier of the electrical equipment) in 1922. The locomotives were finished and delivered between 1924 and 1926. Within this time, Deutsche Reichsbahn (DR) was founded as successor of the now merged state railroads. So the first locomotives were still purchased by Bavarian State Railway while the receipient of the later ones already was DR.

Because DR did not yet have an appropriate numbering scheme, the designation followed Bavarian standards. The locomotives became Bavarian group EP2 and received the numbers from 20006 through 20034 (20001 through 20005 were already occupied by group EP1 [later series E62]). In 1927, DR introduced their number system for electric locomotives. Now, group EP2 became series E32 and got the numbers from E32 06 through E32 34.
Initially, these locomotives had head-end cab doors connecting the cabs to other locomotives and to passenger cars, respectively. All Bavarian electrics were equipped this way. But in the 1930's, DR removed those head-end doors and replaced them by additional windshields.
Because of this series' good running characteristics, eight of those locomotives (E32 07, 13, 17, 18, 26, 29, 30 and 32) were altered in 1932. They got new gears with a different gear ratio. So their top speed rose while their tractive force shrunk. These units were renumbered into series E321 with new numbers from E32 101 through E32 108.
On March 10, 1943, three units (E32 19, E32 21 and E32 23) were destroyed in an air strike in Munich's main station's electric locomotive shed. Further two locomotives (E32 09 and E32 14) shared this destiny and were registered as war losses on November 7 and November 9, 1945, respectively, at the main station of Munich. The remaining 24 locomotives were taken over by Deutsche Bundesbahn (German Federal Railroad / DB) when it was founded on September 7, 1949.
On January 1, 1968, DB introduced their new number system. Only two of the DB units of series E32 had been withdrawn from service before. All others became new series 132. They kept their order numbers. Two-digit order numbers were completed by a leading "0" to become three-digit.
But their end came closer. Until 1972, all of these locomotives had to quit.

Entire series E32 were delivered in the contemporary standard livery for electric locomotives—already valid all over Germany. Their frames were black. Wheels and rods showed a reddish brown. The carbody's color was chocolate brown while the roof was silver.
In the 1930's, all of these locomotives were recolored into DR's new standard livery. Wheels and rods became bright red, now. And the new color for the carbody was steel blue-grey—at least theoretically. Finally, the availability of this specific color tone was poor. So newly delivered locomotives got this color. But when existing locomotives were in need of a new coat of paint, the respective regions used their respective ranges of color tones. Bavaria was the only region also using the prescribed steel blue-grey. But beside that, they also used two slightly different tones of green, instead. Nowadays, it's next to impossible to find out which locomotive got which one of these colors.
After World War II, the livery essentially stayed the same. But the now-unavailable steel blue-grey was replaced by a clearly defined tone of green. Series E32 kept this livery for the rest of their lives.

Unfortunately, photographs of early color and lettering versions are rare. Here is what I've found: 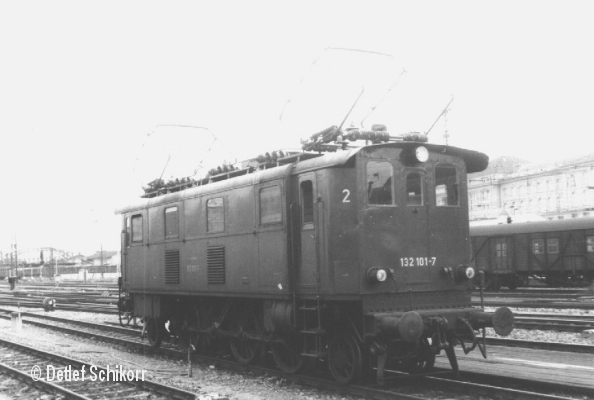 Few has been left over of series E32: Models

Though not suitable for the strong East German market, this inconspicuous locomotive managed to find even two small-batch manufacturers making TT-scale models of it. Jago discontinued production in 2006—just at the same time when Deak started. Additionally, they offered the same versions. So I'm not sure if they were truly different models or if there were simply the molds sold.
Last edited by LVG1 on Sat Apr 11, 2015 4:35 pm, edited 1 time in total.
"Let's eat, grandpa."
Punctuation marks save lives!
Top

"EP2" is the designation of the locomotive type; it fits the entire series. The running numbers of that time were from 20006 through 20034.
"Let's eat, grandpa."
Punctuation marks save lives!
Top

"EP2" is the designation of the locomotive type; it fits the entire series. The running numbers of that time were from 20006 through 20034.

Then it does not help. You can add the Stromlinie model though :)
Top

You've mentioned it. So, it's present.
Everybody can find this information.

Why don't you add it to the wiki?

It mostly waits for you Germans to add to it....since you know these trains better than the rest of us