These are prototypes which either exist as TT scale models or can be modeled from existing models.
Post Reply
5 posts • Page 1 of 1

I've been told that the thread which initially existed under this headline had to be removed because of software problems (viruses or something like that).

But although I want to restart this thread because there were images of Polish prototypes requested in another thread. And this is the best place to post these images.

We're talking about GDR-made double deckers delivered to Poland in large quantities and possible to be made out of mass-produced TT-scale models. I don't know if they are even delivered by any model railroad manufacturer in the proper Polish liveries. May be, somebody else can add this information.

From 1959 to 1977, Waggonbau Görlitz (WG / GDR) delivered 473 four-segment articulated double-decker trains (type Bipa in era IV) to PKP. Between 1967 and 1975, 57 end segments for these trains were added as replacement because there were some problems; but I don't know what kind of problems.
All of these trains were delivered with sloped roof ends. However, nowadays almost all trains have vertical roof ends and a changed arrangement of head end windows.
Additionally, PKP removed the intermediate sections of several trains when worn out and used the remaining end segments as two-segment articulated trains. But they had not been delivered this way. 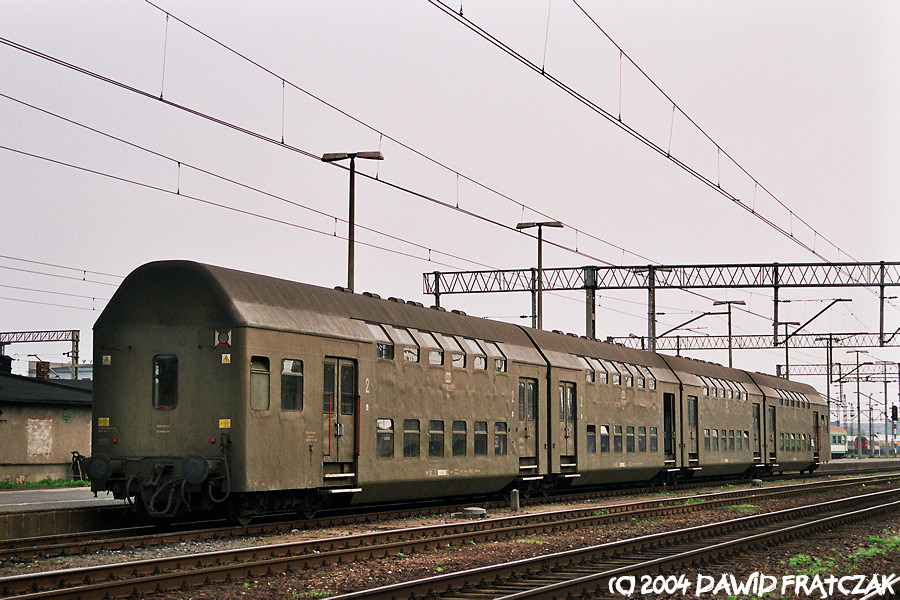 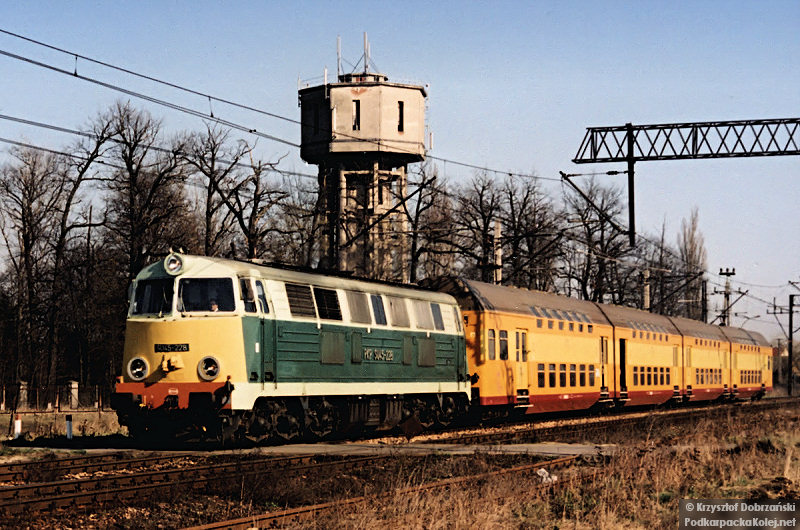 Latest livery as far as I know: 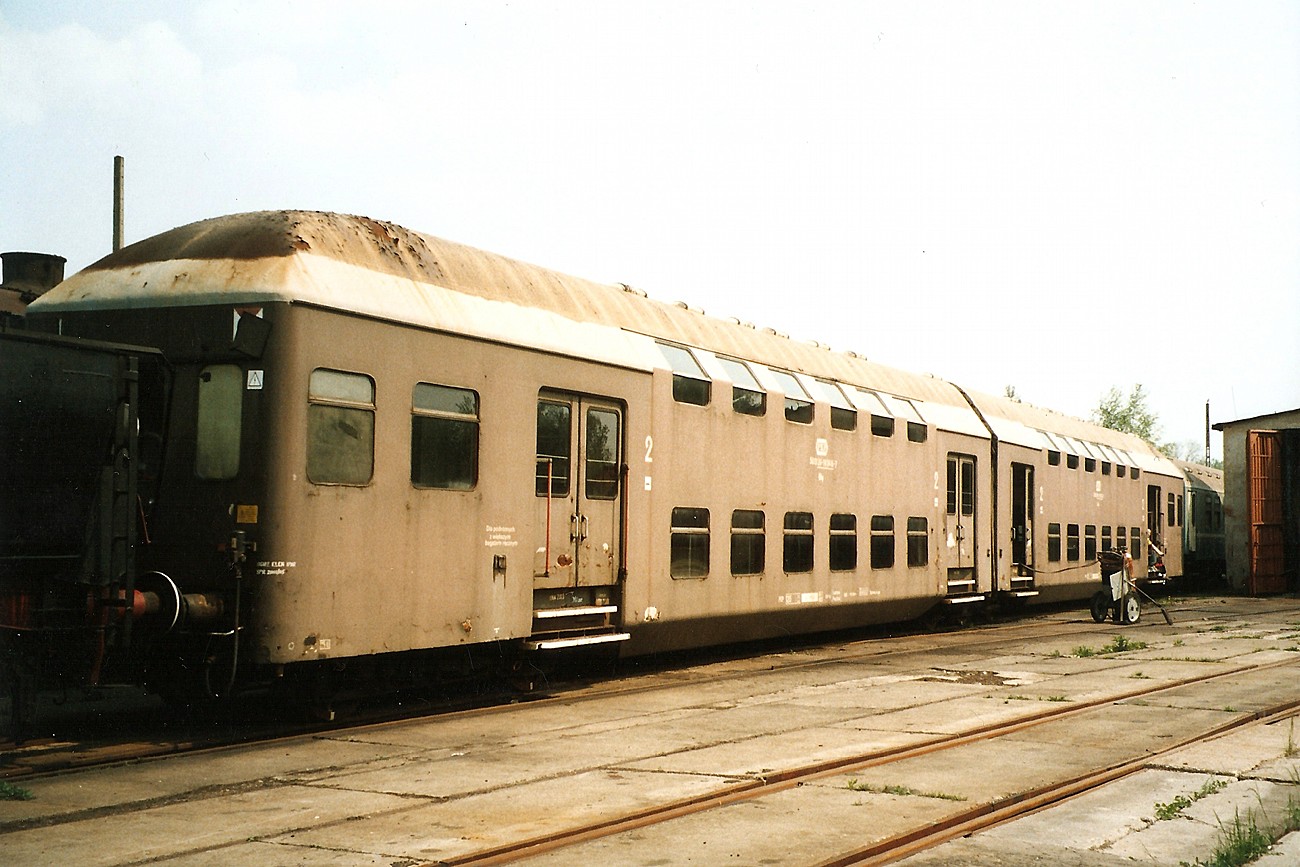 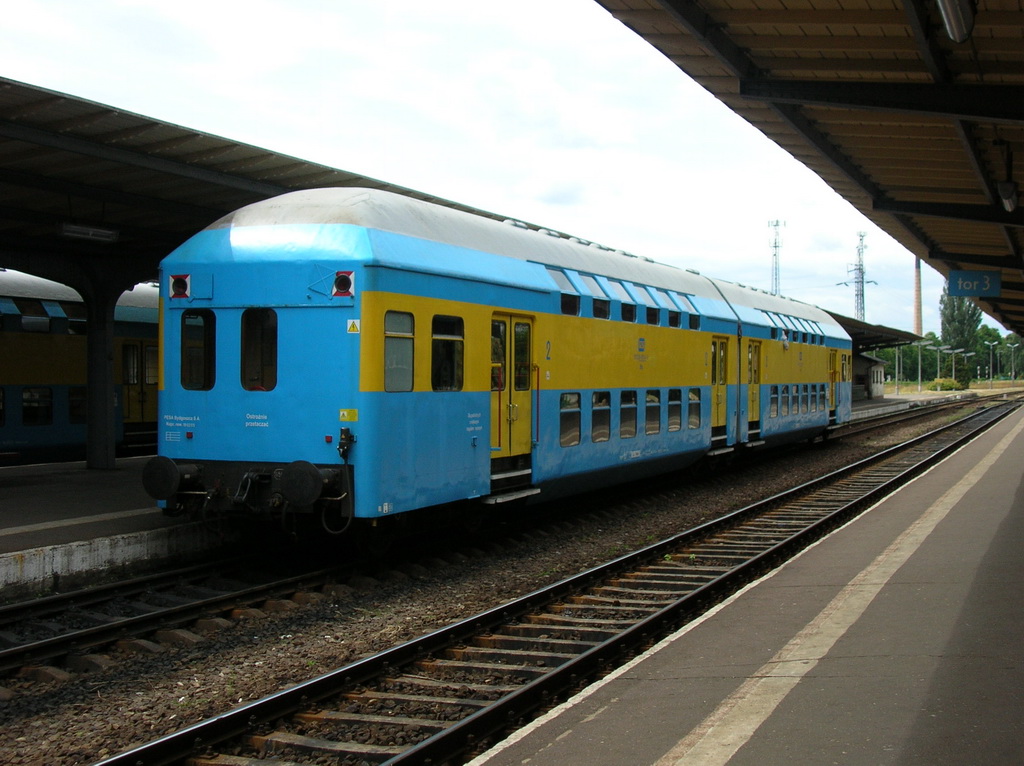 And in 1988 and 1989, PKP received 160 single double-decker coaches (type Bdhpun) from the same manufacturer.
They were all delivered in this blue and yellow livery: 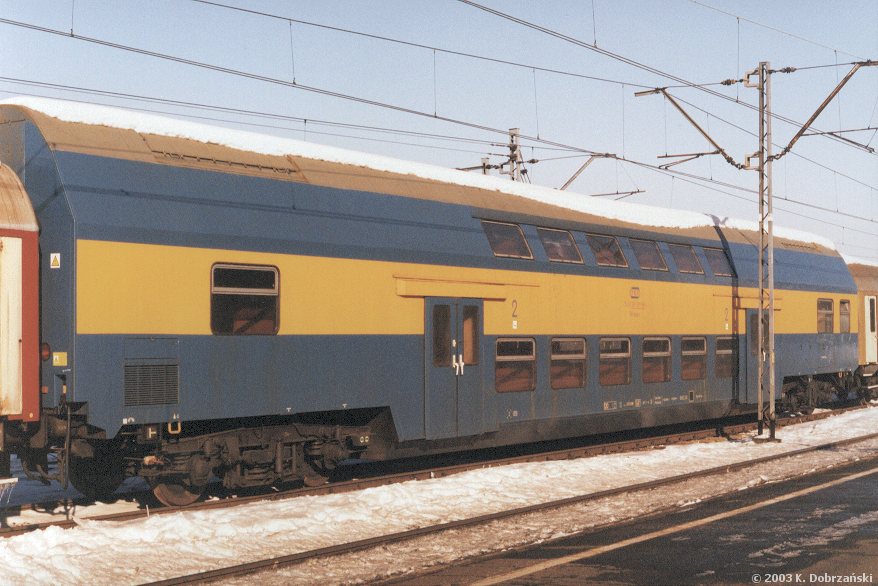 But unfortunately, they lack captions and comments making clear how to use it for TT scale.

So let me try to complement it with information:

Posts 4 and 5:
These are images of the GDR-made double-decker cars described in the first post of this thread.


Christtking wrote:This is the composition (bottom photo only) how these cars were normally run, rack of 6 in the very populated areas (high demand/ rush hour)

The differences between the various versions include the arrangement of roof-top mountings, the existence and position of the "Beds free / Beds occupied" signs next to the doors, the existence of slots behind the grab bars next to the doors and technical things which were not visible from outside (heating and brake systems, for instance). Additionally, the second batch had Görlitz VI trucks while all other batches were equipped with Görlitz V trucks.

Tillig's Y-type sleeping cars can be used as good stand-ins. But if you want to be really prototypical, you'll have to modify them.
All of these cars were delivered with a second pair of trucks for Soviet wide gauge. So they could all be used in international traffic to Soviet Union. That's why all of these cars got a Soviet-style arrangement of three EOT lights at each end while all cars of this type delivered to other customers (including Tillig's models) have only two EOT lights on a clearly lower position at each end.
Concerning other details, I don't know if Tillig's models represent one of the versions delivered to Poland.

The first batch was delivered in emerald green but soon recolored by PKP into their new blue scheme. All other batches were blue from the beginnig on and stayed so until PKP was splitted into various subsidiaries. The sleeping cars were taken over by PKP's inter-city subsidiary.
Concerning the color tones, the basic blue actually should have been the same over the years. But finally, it's hard to tell. GDR initially used pre-war RAL color standards (RAL = Reichsausschuss für Lieferbedingungen = imperial commission for delivery specifications). Poland was strongly influenced by their German history; so it seems to be plausible that they also could have kept to RAL. But if they really did so—I finally don't know it. In the 1970's GDR established their own color standards and included them into their TGL (Technische Normen, Gütevorschriften und Lieferbedingungen / technical norms, quality provisions and delivery specifications) standards. Some of the TGL-standardized color tones were identical to their RAL counterparts, others were not. Additionally, GDR kept using RAL colors for some purposes. Finally, I don't know who followed which rules and if these colors really stayed the same, like actually intended. Differences on photos can be explained by aging, pollution, light, image processing and other circumstances. So photos don't really help.
For the "WARS" lettering and the stripes, they initially used a bright yellow tone. I've also heard about orange; but I don't know if this is aging or interpretation or if PKP really changed to an orange color tone, eventually. May be, our Polish friends can clarify this. Like Christtking's photos show, they later changed to white lettering, longer stripes and white doors.
In the recent years, PKP's inter-city subsidiary introduced a completely different color scheme. It's represented by the two most recent photos of sleeping cars. Additionally, several cars have been modernized, meanwhile. So their external appearance differs clearly, now.

These cars were owned by PKP but operated by WARS. WARS (Przedsiębiorstwo Wagonów Restauracyjnych i Sypialnych / enterprise of dining and sleeping cars) was the operator of all sleeping cars in Poland.
In Poland, all major cities and even many medium-sized cities are connected to a relatively ramified network of inland night trains. These night trains include sleeping cars and couchette coaches, though mainly consisting of regular coaches. That's unique in Europe. And that's what Poland needs so many sleeping cars for. Soviet Union and its successors, respectively, are the only European countries operating more sleeping cars than Poland.
From the 1960's on, Poland purchased the lion's share of their sleeping cars from GDR. But there were also few other sleeping cars. In 1974, for instance, PKP got 30 Yugoslav sleeping cars from GOŠA in Smederevska Palanka. But in spite of keeping to the same standards (UIC type Y) and the same length, they differed from GDR-made cars by a different height and shape of their roofs, by a different shape of the cars' ends, by a different length of their compartments (and so also a different distance and arrangement of windows) by a different arrangement of underfloor mountings and by a completely different type of trucks. These cars were not suitable for changing gauges. And they were intended for inland traffic, only. But occassionally—in charter trains and the like—they could be seen outside Poland, although.

Polish-made Y-type cars:
Except for sleeping cars (at least from the 1960's on), Poland's railroad industry made their own passenger cars of all kinds. They kept to UIC's standards for Y-type cars. They form the lion's share of Poland's passenger vehicle fleet.

At the first glance, these cars are relatively similar to those available in TT scale. But there are lots of differences in the details: GDR-made Y/B70-type coaches:
These cars are a really rare sight. Poland purchased only 150 units of these Y/B70-type cars from Waggonbau Bautzen (WB)—all second-class coaches (complementing a fleet of some thousand Y-type cars). They've designated them Bwxzd.

They were delivered in three batches of 50 cars each. The first batch was delivered in 1978 and differed slightly from the other batches. The second (1984) and third (1985) batches were identical. The only actually visible difference is the arrangement of ventilation housings on the roof. But I don't know if one of the versions is identical to the arrangement of the Y/B70-type coaches available in TT scale. Additionally, the first batch had a brake system which was different from what usually was installed into GDR-made cars. But that's a detail which is hardly (or even not at all) visible in TTscale.

Initially, these cars have preferably been used in international inter-city traffic. I'm not sure what it's like now. I guess, they were all taken over by PKP's inter-city subsidiary. But finally, I don't know it.

These cars were delivered in emerald green. This color tone clearly differed from PKP's usual brownish green. In the 1990's, they were recolored into PKP's new scheme of light green with ivory breast. But I don't know which of the later liveries of PKP these cars got.
"Let's eat, grandpa."
Punctuation marks save lives!
Top

Wow, lots of new pictures of sleeping cars!
They're all GDR-made Y-type sleepers like already described.

Yes, the trucks are interesting, indeed. They're not the original ones. They remind me of Italian Fiat trucks. But I'm not too deep into this topic. So I may be wrong.

Two non-openable windows on the corridor side have been standard with all types of compartment cars in Poland since the 1990's.

And like already said in an earlier post, the Soviet-style arrangement of three EOT lights is typical for all GDR-made Y-type sleeping cars for Poland.

But this is only a minor modernization. The really striking most recent modernization results in cars with sliding doors and the like...

Why do you consider the car on these two images to be an old timer? They are even as old as the other Y-type cars. In this case, they are Polish-made Y-type couchette coaches with all those details usual for Polish-made cars of that era.
"Let's eat, grandpa."
Punctuation marks save lives!
Top

There are additional locomotives that have been released for PKP. 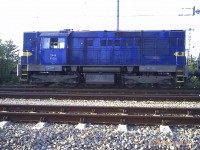