I know, this forum is about North American railroads. So this theme is actually off-topic. But European railroads are often discussed here. And it's obvious that many people lack a bit of orientation concerning European passenger car types. So I want to throw a bit light on this subject.

UIC and ОСЖД (OSZhD) are two international organizations caring about everything concerning international railroad traffic. UIC is West European; ОСЖД (OSZhD) is East European and Asian.
After World War II the growing international railroad traffic in Europe caused more and more problems related to the compatibility of various countries' infrastructure and equipment. So both organizations defined various standards. Their standards were largely similar but not identical. Both organizations' standards for passenger cars became effective in the early 1960's—ОСЖД (OSZhD) in 1962, UIC in 1963.
These standards included both technical (dimensions, crash worthiness etc.) and comfort (space in both classes, size of windows etc.) norms.

When the ОСЖД (OSZhD) standards were finished in 1962, GDR and Bulgaria immediately started their productions of B-type cars. But there was a problem. West European countries didn't like them at all. I'm not sure but I think, I have read somewhere that some countries even barred them from their rails.
The solution was simple. There were eight ОСЖД (OSZhD) members in Europe. Soviet Union didn't care about international standards at all. Albania was kind of less developed country related to railroads without any rail connection to other nations. The other six nations were also UIC members. And UIC standards became effective only one year later and UIC type Y was very similar to ОСЖД (OSZhD) type B. So they switched over to and started with UIC's Y type, respectively.
GDR tried to make it even better. They constructed a type of cars which kept to both ОСЖД-(OSZhD)-type-B and UIC-type-Y standards. Because of the circumstances mentioned before, it was actually not neccessary. But it almost "fell into place" while using their experiences gathered with B and Y types to improve the cars they made. And because not only both Y and B standards were kept to but mass production started in 1970, they called their new type Y/B70. But as far as I know this designation is hardly used outside Germany.

In the 1960's and 1970's the West European TEE (TransEuropExpress) network raised the bar for international high-quality trains. So UIC added another type in the 1970's—Z type. Z type based largely on the EUROFIMA cars which were under construction that time. The length was taken over from X type. But they changed other details—like the minimum length of compartments, for instance. I'm not sure if it was intended, but X type became obsolete this way.

East European railroads changed to longer cars only after UIC's Z type was introduced. So X-type cars have never been made there. They only used B-, Y- and Z-type standards.

But the EUROFIMA construction was relatively short-lived. Already after a short time most railroads purchased other types of cars for the same purpose. Most of them ordered open-seating cars and diners matching the EUROFIMA-cars' appearance. Some also bought combines or baggage cars looking like EUROFIMAs or even cars with both compartment and open-seating areas.
The construction of those cars bases on EUROFIMA cars but EUROFIMA cars themselves are not very common.

Those standardized cars were intended for international traffic mainly. Of course, (almost) all nations continued purchasing other types of cars (double-decker cars, for instance) mainly for their inland traffic. And older cars have also continued to be used for some decades; some even got new car bodies. So not every passenger car in Europe belongs to one of those types.
"Let's eat, grandpa."
Punctuation marks save lives!
Top

Thank you - my main interest is German passenger trains so this is great info.
My website: https://www.ttnut.com
It's the website you're already on. But if you want to be even more on it, click the link.
Top

Most standardized cars were made for the inland markets. So almost all nations had their individual designs of standardized cars. These designs differed more or less from each other although keeping to the same standards.
That time the national railroads were the main customers. And they didn't want a large variety of designs in their fleets. So in most countries various manufacturers made cars of identical designs. That's why the designs can hardly be distinguished by the manufacturer. The only senseful distinction is by the country of origin of a car.

ОСЖД (OSZhD) type B:
UIC type X:
I don't know if Spain and France, respectively, also made X-type cars.
In used condition many X-type cars and X-type predecessors were sold from Germany, Austria and Italy to other nations like Yugoslavia, Albania, Greece, the Netherlands (diners and sleepers) and Denmark (sleepers).

UIC type Y (and standard type Y/B70):
I don't know if Bulgaria also made Y-type cars.
After the fall of the wall several GDR-made Y/B70- and possibly also Y-type cars in used condition were purchased by other nations—Bosnia-Herzegovina, for instance.

Unfortunately, the standards' designations are extremely seldom referred to for West European cars of that era. So I don't have a complete overview.
In East Europe several nations made Z-type cars with both folding and sliding doors.
I'm not sure about production of Z-type cars in Romania and most West European countries.
After the fall of the wall several GDR-made Z-type cars in used condition were purchased by other nations—Bulgaria and Bosnia-Herzegovina, for instance.
Lithuanian Z-type sleepers were sold to Slovakia.

EUROFIMA cars were made by a syndicate of the six member-contries' industries—Germany, France, Italy, Belgium, Austria and Switzerland. Each of these nations administered to these cars. The cars' construction succeeded; only the Italian share—the trucks (bogies)—was a disappointment. All of these nations bought some of those cars.
Some of them have been sold in used condition to other countries—a Czech private railroad, for example.

Sometimes EUROFIMA cars are designated as Z-type cars. They fit all Z-type standards.
But Z type was derived from EUROFIMA cars and not the other way round. The standard did not yet exist when these cars were constructed. So one can argue with pleasure if these cars can be counted as Z type or not.

Cars for commuter trains have not been standardized although many were made fitting the standard types' dimensions. All countries, where at least one passenger car manufacturer existed, made their own types of cars. So countries like Greece, Albania and Luxembourg had to buy them abroad. But also Czechoslovakia bought a lot of them in Hungary.
The only European cars for commuter trains which were intentionally made for the international market were Görlitz-made double deckers.
The four-segment articulated double decker trains were made for GDR (152 units), Poland (473 units), Czechoslovakia (50 units), Romania (130 units) and Bulgaria (8 units). Some of the Romanian trains even had one 1st class segment.
The single double decker cars were sold to GDR (572 cars), Poland (160 cars), Czechoslovakia (50 cars) and Romania (230 cars).
The most recent generation of Görlitz-made double deckers found buyers in Germany (both DB and private railroads), Poland (Koleje Mazowieckie), Luxembourg, Denmark and Israel.
Last edited by LVG1 on Tue Apr 30, 2013 6:58 pm, edited 1 time in total.
"Let's eat, grandpa."
Punctuation marks save lives!
Top

Additional info for your list:
Most of the Danish Y cars were sold to Iran. Some of them were sold to Germany. Only very few of them are left in Denmark.
I don't see Czechoslovak Y cars in your list. They were used in express train "Vindobona" Berlin-Prague-Vienna when CSD were running it with M296.1 at each end of the train. Some of them may be still in service at CD.
http://www.flickr.com/photos/52467480@N ... m296%20csd
Top

j p wrote:I don't see Czechoslovak Y cars in your list. They were used in express train "Vindobona" Berlin-Prague-Vienna when CSD were running it with M296.1 at each end of the train. Some of them may be still in service at CD.

I know that there were open-seating cars keeping to Y-type dimensions made in Czechoslovakia. Most of them are used in locomotive hauled trains, some together with railcars. If they are Y-type cars ...
... see my last post.
But I'm not sure if the cars used in DMU's and EMU's kept to Y-type standards. And I'm also not sure if they can be seen as individual cars because they were only used in multiple unit consists.
As far as I know, the cars of the M296.1 units are not in service any more.

That's interesting. Do you know more about the German buyers? I haven't heard of that.

By the way:
There are more gaps in my knowledge. Some of them were mentioned. I'ld be pleased if some poeple can fill these gaps by more information and corrections, respectively.
"Let's eat, grandpa."
Punctuation marks save lives!
Top 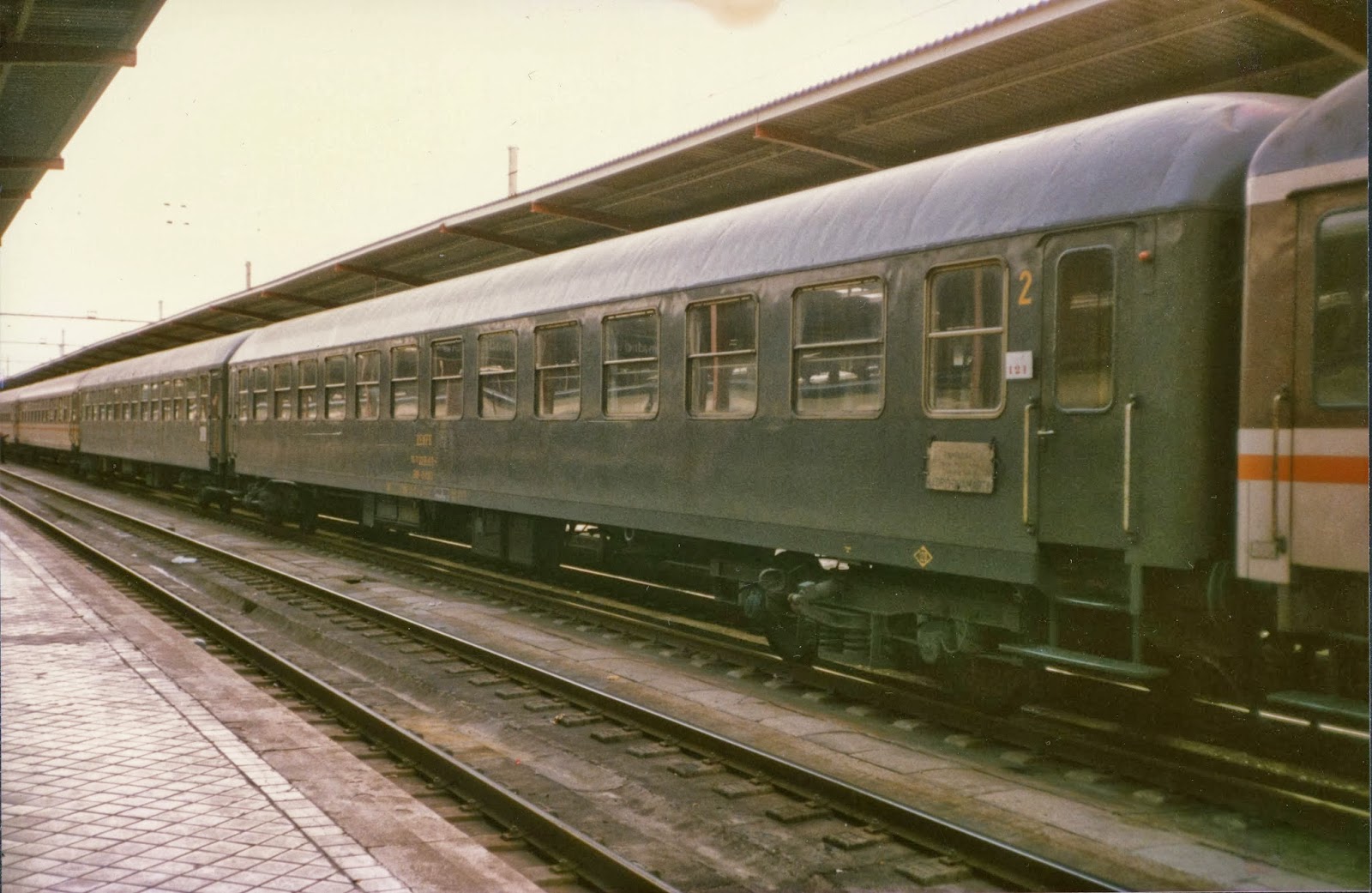 There were many cars—especially in western Europe—which were similar to the standardized cars but did not match those standards.
"Let's eat, grandpa."
Punctuation marks save lives!
Top
Post Reply
8 posts • Page 1 of 1