I forgot to take a picture before weathering

It's a crisp moulding with turned metal buffers, wheels running in what appear to be pressed bearings giving very free running. NEM pockets for couplings, it comes supplied with new style standard couplings. The lettering, though crisp, is not actually all legible, some being simply blocks. The paint finish is good. Detail-wise, I think there are a couple of end handrails missing, though these would be very fragile if fitted.
http://www.flickr.com/photos/richbucknall/
Top

I like the weathering. Looks good.
Mark
//S
Top

Christtking wrote:I've consulted some photos of real life prototypes and they are some discrepancies about this model. The partitions (panels, sections) on the model seem to be 7 on the left sliding door (wall) to the center (vertical support beam for the sliding door latching mechanism) and 6 raised vertical dividers and the other half to the right another 7 panels, total of 14 per side. Unfortunately the model has only 12. 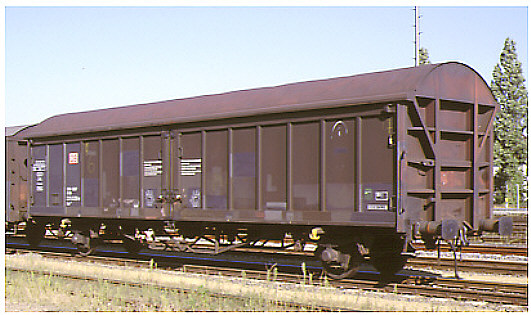 Types 302, 303 and 304 have 12 panels like the model, but differ by different ends, more narrow upper and lower edges of the sliding walls and by completely covered middle stanchions.

At the first glance, the model looks like a representation of types 302, 303 and 304. Only a closer look shows the inconsistencies which hardly anybody knows. So for someone who's no rivet counter, this model is a good stand-in for these types.

On the other hand, like in America, also in Europe there are numerous variations of predominantly similar car types. Unfortunately, good literature about freight cars of any other railroad than DB is extremely hard to find in Germany.
The exact prototype of this model doesn't exist at DB but it's thoroughly possible that it exists at some other European railroad. I don't know.
PSK Modelbouw is a Dutch manufacturer. May be there's an exact prototype at some Dutch railroad. Possibly, rdikken knows more...

Christtking wrote:If anyone has access to the German published book by GeraMond called "DB-Fahrzeuge" by author Michael Dostal, you can find the photos on pages 72 & 73 (or Hbikklls 295 category). 295 was the second generation of sliding/movable wall wagon based on type 294 (as the featured model).

Within the groups 294 / 295 and 302 / 303 / 304, there are no different generations, but only various batches with minor differences. I'm not sure if the differences are externally visible at all.


By the way:
The 14-panel cars look kind of strange to me. I'm more used to see the 12-panel ones.
May be, that's a question of amout. Only little more than 2,000 units with 14 panels were made. The 12-panel cars were made in larger amounts.
But may also be, that it's a question of time. I saw my first sliding wall cars in 1990. I can't remember to ever have seen a first-generation sliding wall car. Second-generation cars have been a rare sight in my area, too. And the 14-panel ones are the clearly older ones and were withdrawn from service step by step that time.
However, I wouldn't buy a 14-panel car, because I'm clearly more familiar with the 12-panel ones...
"Let's eat, grandpa."
Punctuation marks save lives!
Top

This discussion has fuelled me to check up on the general dimensions. The prototype is approx. 13.1m over the body, and the model scales in at 12.8m- or a full scale foot too short.
http://www.flickr.com/photos/richbucknall/
Top

Did that stand come with the car? I would imagine that the stand would be nice to put in one of those clear shelf cases, to display one's favourite rolling stock.
Life is short, play with TT Scale Trains!
Top

Rich B wrote:The prototype is approx. 13.1m over the body, and the model scales in at 12.8m- or a full scale foot too short.

Depends on how you measure...
Do you measure only the pure body or including the mechanisms on both ends or only the length of the chassis?