A gentleman in Hungary by the name of Ferenc Hubert produces small-batch runs of Hungarian locomotives; so far he's made M40, M41, V43, and V63 - the latter three being three quarters of the most common railway power in Hungary, so if you want to model MÁV they're essential.

I'm not sure what the body is made of but I'm guessing resin, and it's mounted on a Tillig V100 chassis. He takes requests too, for running numbers: the prototype of my model pulled my train this past summer from Balatonfüred to Székesfehérvár.

The only complication is that Mr Hubert refuses to ship - he'll only deliver in person; I'm fortunate that I could ask a relative to pick it up for me (according to whom Mr Hubert ia very lovely person). 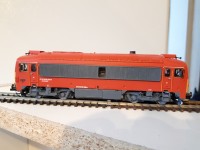 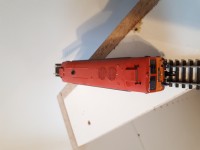 Edit2: I found the original instruction sheet in the box under the foam. Chassis is Tillig V100.
Last edited by Marquette on Tue Dec 24, 2019 12:05 pm, edited 2 times in total.
#include <std/disclaimer.h>
Top

He's presently making M41s, and he told me he'll be making a new batch of V43s in the new year.
#include <std/disclaimer.h>
Top

Marquette wrote:The only complication is that Mr Hubert refuses to ship - he'll only deliver in person

@ConducTTor - well you're not wrong, it *is* an issue, unless you know someone there who can meet him...

I'll hold-off buying for now...
but if I was to run anything during the TT-Tracks "European session'... it HAS to be Hungarian.
I have a Piko GySEV Taurus... and a -really- old BTTB M61 NoHab (that pre-dates DCC by decades!)

BUT -- An offer:
If anyone wants to order from Feri Hubert with local Budapest delivery...
I can provide the contact details for our place in Budapest District 18 - PestSzentLőrinc via PM.

A long-time family friend is staying there, and could take the delivery...
As a back-up; Katalin's Mother is one block away.

Richard-B wrote:I'll hold-off buying for now...
but if I was to run anything during the TT-Tracks "European session'... it HAS to be Hungarian.
I have a Piko GySEV Taurus... and a -really- old BTTB M61 NoHab (that pre-dates DCC by decades!)

You've seen my TRAXX... I'm looking at DCCifying and getting a sound decoder into my M41... and planning to get a V43 just as soon as they become available... we'll take over the European part too lol... SP and MÁV (well and GySEV. Do you have coaches for your Taurus?)
#include <std/disclaimer.h>
Top

Marquette wrote:Do you have coaches for your Taurus?

None...
The thought of actually running MÁV and GySEV had never occurred to me before this thread!

I only have the engines because:
Richard Brennan - http://www.tt-west.com
Somewhere between San Francisco and Budapest...
Top
Post Reply
8 posts • Page 1 of 1