So it seems the US Army took a V36. numbered "L 21339" from Europe back to the US in late 1945 and demonstrated for government and industry representatives at Fort Monroe, VA in 1946. From there it went to Camp Patrick Henry, VA for further testing until 1948, when it went to the Army Transportation School at Fort Eustis, VA, and finally scrapped in 1952.

by ConducTTor
I can't find any pics of it. Too bad

by Marquette
Yeah I hunted for a while, too. Maybe could contact the Army Transportation Museum at Fort Eustis...

by MacG
Perhaps one of these. http://www.robertsarmory.com/whitcomb.htm (in the middle of the website)

The museum would be a good starting point.

MacG wrote:Perhaps one of these. http://www.robertsarmory.com/whitcomb.htm (in the middle of the website) 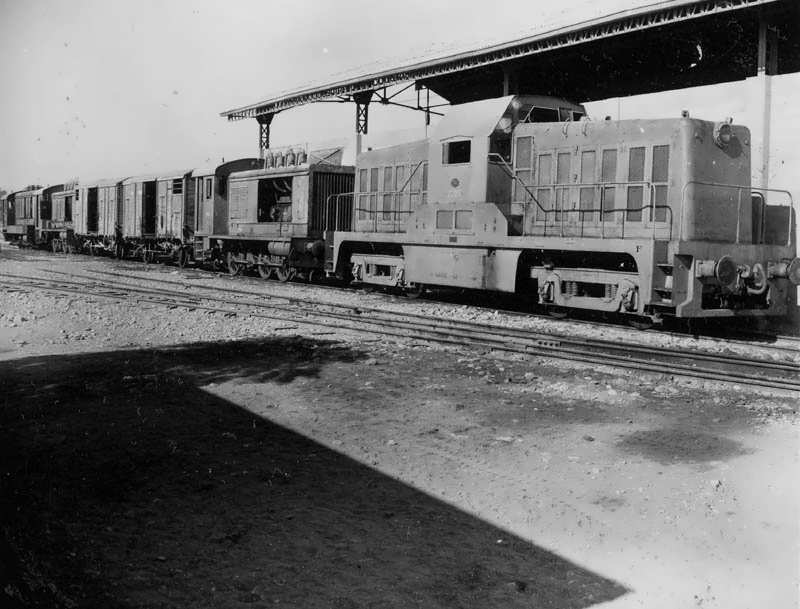 I think it's fairly safe to say that the engine behind the Whitcomb is a WR360 C-something, in other words a V36? Also, the one right after the freight cars. I'm not sure what the last one is but it's different. However, this is in Beirut... so probably these ones were used after the war either by CEL in Lebanon or Israel Railways; that's another interesting avenue for someone to explore...

Marquette wrote:... so probably these ones were used after the war either by CEL in Lebanon or Israel Railways ...

It's possible. Or one of these may have been shipped two years later. One doesn't know.

by Marquette
It's certainly a possibility. But there were plenty of other WR 360 C's that came into American hands, so the Fort Eustis unit could just as easily have come from the US Zone, actually I'd venture to guess that that's more likely.

I just did a quick look and found the following:

"At least two German Army (Wehrmacht) Diesel-hydraulic locomotives, left over from the British Mandate period. These two locomotives, of the V36 type, were captured by the British Army during the Second World War along with several others. They got War Department numbers 70248 and 70249. At the foundation of Israel the two locmotives were inoperative and apparently remained this way despite Israel Railways' attempts of repairing one utilising parts from the other. This type's wheel arrangement is C (0-6-0) and its engine's output is 360hp. The original Wehrmacht type designation was WR360 C14 and the locomotives' original numbers were 11465 and 11464 respectively."

So the two in our photo above could very well be these two!

Israel Railways drawing for the V36 in the original IR diesel locomotive livery (grey/red), showing the IR unit(s) were (to be?) numbered 201 (and 202?).

The one source I've found so far says they were never operational, another said they were on hand until after the first Belgian-built engines arrived to Israel...

by TheKnighTT
V36 is the post-war designation of the WR360C used by Deutsche Bundesbahn before it became a 236 in 1968. For Deutsche Reichsbahn of the GDR it became a 103 after 1968.

The locomotive on the end of the train in Beirut is a WR550D, one of only three that have been built. The designation tells us, it´s a Wehrmacht shunting (Rangier) locomotive with a 0-8-0 Wheel Arrangement (D-coupler) and 550 hp. Two of those were shipped to North Africa, one was used on the Beirut-Haifa-line until 1946 and scrapped in 1958. The whereabouts of the other one is unknown. The third locomotive was used in an amored train and is on display at the train museum Warsaw, poland.
All times are UTC-04:00
Page 1 of 1