by sd80mac
Kadee has announced a new #705 HOn3 coupler. This coupler is very similar in appearance to its HO scale #58/158 counterpart, and according to Kadee, "The #705 Metal Coupler will work anywhere a #713 or #714 Coupler will work...features an all metal coupler head, shank, and centering spring and comes complete with and insulated draft gearbox and lid."

by AstroGoat760
That is nice. Variety in TT Scale that works together is always a good thing.

by dileTTante
We have seen the 705 at the show in Salt Lake City. I don't have experience to judge for myself, but asked Bill Dixon. His opinion is that the coupler looks good but the box is too wide to be useful for TT.
- Terry C

dileTTante wrote:We have seen the 705 at the show in Salt Lake City. I don't have experience to judge for myself, but asked Bill Dixon. His opinion is that the coupler looks good but the box is too wide to be useful for TT.
- Terry C

I had time to look at the coupler.
First a view from above. 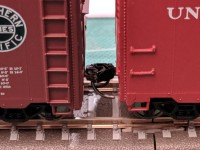 Coupled to a MicroTrains they look good.
They seem to operate together OK.
I have two cars with these couplers installed and hope to have up to four more cars ready for this weekends run.
I will report back on their operation.

by sacto-tt
I picked up some 705s to put on a few of my GC boxcars and got a bit of a surprise. The 705s use a 00-90 screw and the GC boxcars are setup for 714s which use a 0-80 screw. Luckily I was able to gently ream out the hole in the 705s with a #52 bit and use the 0-80 screw without impeding the operation.
They definitely look better than 714s, but I will only be putting them on new installs since I already have a bunch of 714 equipped cars. No operation problems that I saw.

They work well on the GCR boxcars...

by railtwister
Is anyone using the new non split-shank HOn3 #705 coupler from Kadee on their TT scale models? The coupler only comes in assembled form, but is very much like a shrunk down #5 (HO) coupler, with a coiled spring on the knuckle. Since it comes already assembled, I can’t see what kind of centering spring it uses. If you dislike the split-shank style couplers, this might be a better choice for TT than the MTL N-Scale couplers which all are of the split shank design.

by RodTT
I have some 705s. I much prefer Kadees to MTLs, which I've found to be wobbly and less reliable. No idea what type of centring spring the 705s use though.
All times are UTC-05:00
Page 1 of 1