Bigelov wrote: ↑
Mon Aug 17, 2020 8:44 am
... Those blisters on the sides, with grilles on them are part of the dynamic braking system. ... I suspect Lionel just made the non-dynamic brake version shell, and then painted them with the full range of schemes.

Yes, you're right about that. It is the Dynamic Brake. The front of the cab was also white back then, as you can see on the photos from 1967. The same probably applies to the side with the long hood. It gets a little bit less clear with the winterization hatch. It's hard to tell if there was one in 1967. Her sister 1721 definitely had it.

I have a B&M 1723 here too. Let me see if I'm willing to add these details. That is a pre-production model with a matt lacquered cab.
Lok-n-Roll.de - we send worldwide

But the steps in orange are usually found only at the newer paint scheme. For example, I found B&M 1746, which got the orange in 1978 in the old paint scheme. But at the beginning of the 80s, she got no orange with the new paint.

I mentioned in a previous post that I only belatedly discovered the GP9 fuel tank prises off. It's a great place to add extra weight:

I did this to hopefully improve the running of the first one I converted (Chessie), which is sometimes a bit jerky, though it hasn't really had any effect. When one of the others went like this it turned out to be a faulty decoder but surely not another? Maybe it's the cheap Chinese motor or something to do with the Sebnitz parts, or one of those affecting the decoder's operation. I really don't want to dismantle it so I think I'll just live with it unless it gets worse, and consider it a standby loco.
But has anyone else had problems with jerkiness on their conversions?
Naples sTreeT: http://mattersofinterest.co.uk/naplesstrt.html
The video: https://youtu.be/wUoV41tM4AU
Computerised switching: http://mattersofinterest.co.uk/swsetup.exe
Top

Is it possible this is a problem with the electrical pickups on the wheels? Perhaps they're dirty? Or maybe bend them slightly so they make better contact against the wheels?
My website: https://www.ttnut.com
It's the website you're already on. But if you want to be even more on it, click the link.
Top

Sometimes there is also a burr from injection molding on the gears. Some gear grease should also be used. But sparingly.
Lok-n-Roll.de - we send worldwide

I bought the lok'n roll chassis and now I have a question regarding the side parts of the trucks. The trucks on the engine has the side beams that look especially designed. I also have cut of the side of the Lionel trucks. It does not fit together, but is it meant to fit? Are there other truck side parts meant to fit on the Lok'n roll chassis? Or do I just have to happily file away and make everything fit? 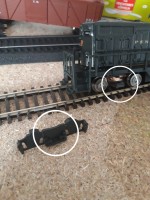 I had a similar question earlier in this topic and MacG replied as follows:

I nipped and filed the lug ends away and glued the original Lionel sideframes directly on with epoxy after sawing and filing them to fit. I didn't use blocks as described above. To my relief, they are still stuck on and look ok.
Naples sTreeT: http://mattersofinterest.co.uk/naplesstrt.html
The video: https://youtu.be/wUoV41tM4AU
Computerised switching: http://mattersofinterest.co.uk/swsetup.exe
Top
Post Reply
173 posts