Is there a market for US TT?

railtwister wrote:Why is everyone so obsessed with the body shell for a new locomotive, when there is no decent quality drive system to put it on?

That's where a North American built and distributed Hollywood Foundry BullAnt type mechanism would come in...

The design is very modular and flexible.

Instead of a locomotive specific chassis you can have something that can be adapted/adjusted to fit anything.

Sent from my SM-G903W using Tapatalk

Do you mean something like this, as sold by 3SMR in the UK? (Though I think they are in short supply, I've been waining to hear from them for a while). 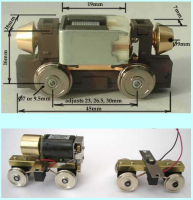 RodTT wrote:
Do you mean something like this, as sold by 3SMR in the UK? (Though I think they are in short supply, I've been waining to hear from them for a while).
bogies.png

Having things that are in short supply, not generally available, or possibly discontinued isn’t very useful. I’ve heard of the Bull Ant, but never seen one. Ordering something sight unseen on speculation, especially from another country, isn’t something I’m likely to do, nor are a lot of others likely to do it either. Has anyone ever done an honest review of the Bull Ant for a TT locomotive? Also, no one has yet said anything about the planned drive for the GP38 from TT_IMS.

NWSL has self-contained motor-on-truck drives that they offer for HO and also S (called Stanton Drives). Would something like that even be feasible for TT, or would the motor need to be too small?

The GP38 came with an optional fold up etch for a chassis that could be used with either Bull Ant or Tillig trucks, whatever the modeler wanted to use along with their choice for motor, etc,.
Lok N Roll produced a RTR chassis for it as well, I believe they are still available.
As of right now Hollywood Foundry is still on hiatus, he had surgery and is in the process of moving so it will be a while before they can be obtained. That other small truck with the motor mounted on it is a Halling, I believe? It's neat in that the wheelbase can be changed slightly, but unfortunately the way the motor mounts it makes it hard to fit in a roadswitcher body.

The NWSL drives are pretty big for TT, they may have some uses but I haven't needed to buy one yet.
Top

I didn’t mean to imply that an HO NWSL Stanton drive could fit a TT loco, but more was wondering if a smaller, TT version could be made, using similar construction & design? I’m not convinced that a motor-on-truck design is the best way to go. I’m still favoring a split frame design similar to Kato/Atlas N scale locos, maybe even designed to use the exact same DCC replacement boards they use, to avoid DCC development costs. I realize there are some on this list who object to such a design, because their preferred digital system doesn’t offer such a board, but the fact is, that type of system isn’t even available in the USA (I don’t know how commonly used it is, even in Europe). For a small loco like in TT or N scale, that type of board takes up far less space than a separate decoder and plug would, and designing a TT loco to use an already existing N scale board seems to be a good idea.

railtwister wrote:Why is everyone so obsessed with the body shell for a new locomotive, when there is no decent quality drive system to put it on? The TT_IMS group over on Yahoo Groups produced a resin GP38 shell, whatever happened to plans for the drive for that?

What is needed first is a good set of trucks with quality wheels, gears, good electrical pickup system, correct wheelbase, & changeable sideframes. Until a decent drivetrain exists, beautiful body shells are of little use. Hacking up a currently available mediocre European drive to “sort of” fit a US profile body is not a realistic solution. Personally, I would love to see a Rapido built TT scale Budd RDC, but realistically, that is not the answer either, because it has such limited appeal (as if TT scale isn’t limited enough). An EMD F unit (plus F’s have the added advantage of not needing fragile & difficult to make handrails), GP, or SD would have more universal appeal, Alco, GE, FM & Baldwin, slightly less. Really, how many railroads actually had RDC’s?

I agree with Bill on the need of a quality drive system.

With the EMD F units, I am not so certain.
They don't seem to be as popular as they used to be.
I personally would not be interested in a F unit unless it came with some matching passenger cars.

railtwister wrote:Having things that are in short supply, not generally available, or possibly discontinued isn’t very useful. I’ve heard of the Bull Ant, but never seen one. Ordering something sight unseen on speculation, especially from another country, isn’t something I’m likely to do, nor are a lot of others likely to do it either.

That's why I suggest that it be made and distributed within North America.

However, the short supply issue is unavoidable unless someone is willing to warehouse a large supply against the future.

For a full chassis it makes more sense to stretch out and beef up N Scale than trying to mill down HO Scale.

Take a look at what the NZ120 guys have done. Matching N Scale locos to what they need.

It has been rightly pointed out that even the few modelers here on TTNut can't agree on what they want most to be produced. That is seen as making a small market even smaller and a no-go for any manufacturer.

I think that if TT had the choices available in almost all other scales, everyone here could have something close to heart's desire and new modelers would have better reason to try TT scale.

What bothers me about these discussions is that many TT people treat the scale as a special interest group. They know that they're orphans and take pride in making do with ancient HP products and spending hundreds of dollars on models to cannibalize for their own needs, or spending thousands of dollars on machine shop equipment to build what they want. They think TT is a special interest group like Sn2, HOm, On3, etc.

In my mind TT is a fully legitimate scale which has a rightful place in the range between Z and G. There are lots of European models which prove it. At national train shows I have been astounded by huge layouts in Z scale. There are five manufacturers making North American Z scale (wikipedia). I resent that there is no TT and that we are reduced to making do and being thankful for scraps. (Well, really I don't resent it much because I have European TT and am happy - except I can't afford to buy all I want.)

Whatever ends up being produced next in TT motive power will depend on the manufacturers. All the talk here is for nothing until a maker is persuaded to crank out some TT models. The thing to do is to approach as many sources as possible and twist some arms. I think it should be done in an informed way. Mark's (CSD's) comments about Rapido show the level where the action needs to be to get anything done. I'd like to see less talk about a favourite locomotive and more talk about how to get something made. This would be very helpful for any of us who intend to approach a manufacturer.

The problem with this discussion is the following:

Nothing will be made. Ever. Because the numbers simply do not exist.

If there is *any* chance of something being produced, it will be because every single person here accepts that they WILL buy at least one and possibly more of whatever is made.

That's it. End of story.

We've been through what models make most sense. Everyone agree (put your money where your mouth is) to buy whichever of those gets produced and we have a tiny chance of it actually happening.

Otherwise this discussion is beyond useless. Why? Because the answer to the title of this post is "no. There is no market".

Not trying to be a downer. But after so many years of going round and round on this issue, one must accept the facts.