ctxmf74 wrote:"The quality of the mold was better than GoldCoast! "

I wonder if the molds are still around lost in some old basement or barn? .........DaveB

The quality of the molds and the details of the Star Line AAR boxcars were excellent. The kits, when initially issued (sometime in 1949), were state of the art, considering the use of the plastic sides, ends, roofs and detail parts (the plastic technology was relatively new). I believe these kits were equal in quality to the Varney HO kits at the time. 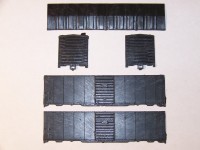 This is the first TT kit that I built in 1991. I used Kemtron trucks, MTL couplers, and an HP decal set for the roadname and number, and a Champ HO decal for the "See America First" herald. The HO herald was listed as 54 inches in HO, which scales pretty close to 72 inches in TT. (120/87)*54= 74.4 inches, the GN used 72 inch heralds on many boxcars, not sure if the "See America First" herald was used in the 72 inch size.

I believe the TT scale Star Line molds and tooling (and possibly parts and kits) are located in storage somewhere in Chicago. John Harmon in 1993(?) sold his TT line to some gentlemen in Chicago who has since passed away. The gentlemen's family has not been willing to sell any of the items obtained from Harmon.

"Harmon used the molds (or the excess Star Line parts inventory that he acquired) to produce the AMP B-28 boxcar kit. "

That Great Northern cars looks very nice. Did AMP use a stable plastic for their models? I'll be looking for one of those kits......DaveB
Top

ctxmf74 wrote:"Harmon used the molds (or the excess Star Line parts inventory that he acquired) to produce the AMP B-28 boxcar kit. "

That Great Northern cars looks very nice. Did AMP use a stable plastic for their models? I'll be looking for one of those kits......DaveB

Really - if AMP's models have fared well over time I'll be looking out for them as well.

Thats a very well made model, I am very impressed of that quality of work. However a number of Alleghenny models made it to the UK where they were sold by Clive Thompson a previous owner of 3SMR to my knowledge (limited) they were all wood and cardstock sides though not resin or plastic. Those car sides and ends have the look of the great Elmer Mckay about them to me. Years ago Elmer sent me a few resin car sides that look like those in the picture above. What I don't know is whether or not Elmer copied these from old starline sides or built his own masters from scratch
Top

Is it the same story?..
Top

I just talked to John Harmon and he did have the molds, and Yes, that's pretty much the rest of the story. It's not 100% correct, the stock IS for sale (if you have a spare $50K to buy it with!).
And a lot of what is there probably wouldn't have survived well, so the items that might still have some value (brass parts, molds, etc) are only a small part of what's there (think lots of warped wood, damp cardstock sides, etc..)
Top

I have a complete set of an AMP B-28 castings as well as two other castings (white resin) of two similar cars, one being a double door car. I intend to use the AMP castings for a personal master to use in my own TT modelling program. I am not overly conversant with 1935-1950 era steel box cars per se. Any one in TT Nutdom know what particular prototype the B-28 is based upon, when the cars were in service, and what railroads used them?

It is clear from the side where the trucks were supposed to be mounted.
Top