The only one i know; built together by A&K 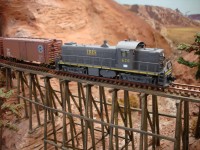 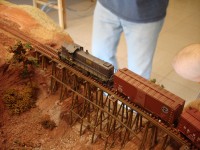 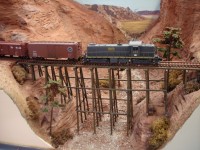 Now THIS is an Alco!

WTF? No, seriously, what is that?
My website: https://www.ttnut.com
It's the website you're already on. But if you want to be even more on it, click the link.
Top

The Alco DH643; AKA "Alco-haulic"... was a hopeful alternative to the Krauss-Maffei diesel-hydraulics bought by the D&RGW and Espee from Germany...

They used to rumble up and down the California Central Valley right next to US 99... (before I-5), which was the flattest long chunk or right-of-way on the SP. They were considered pretty worthless in the mountains.

An ALCO Century 628 would be nice. The RSD is on my workbench, in detail the Tri-mount trucks. I'm really slow with finishing the project, I know.